It’s my last full day in Austin and I try really hard not to be sad about it. Fortunately that’s easy, because today’s the day we go to Natural Bridge Caverns in San Antonio and see the bats!

Everyone sleeps in and I’m the first up, again. I’ve finished Stories of Your Life and Others by now (I finished it while I was waiting for the bus to/at Book People yesterday); my eye catches a James Tiptree, Jr. collection and picks that up.

“Take that with you,” Elizabeth says when they wake up. “I’m basically holding on to those books to give away to people.”

Noah and Elizabeth decide to take advantage of the rental car and do the grocery shopping for all of the heavy things (read as: kitty litter). I follow along, because I really do genuinely like wandering around grocery stores, even if (like my trip with Elizabeth yesterday) there’s no giddy quality of planning and anticipation involved.

After we bring the groceries back (and make a quick run to the store to find a misplaced “bag of bags”), we decide to try to get lunch in town before the drive out to San Antonio. The places we check have incredibly long waits, though, so instead we get some macarons and a turkey and cheese sandwich (for me and Noah to split) and head straight to San Antonio and decide to eat there. Noah consults with a friend via text about the best tacos in San Antonio, and he responds: “Rolando’s Super Tacos, Jesus is Lord.”

A podcast interview with Eddie Izzard fills the silence on the long drive; a Texas state lawmaker (who both Noah and Elizabeth recognize, since they both work in the Capitol) drives very aggressively, ultimately passing us on the right, and Elizabeth and Noah both shriek in inchoate rage. (Apparently she’s a garbage politician in addition to a garbage driver.)

We get to Rolando’s Super Taco without incident. We took the “Jesus is Lord” part of the text to mean that really, they’re awesome tacos, but then when we arrive we see it: bold text, professionally painted on the side of the building. 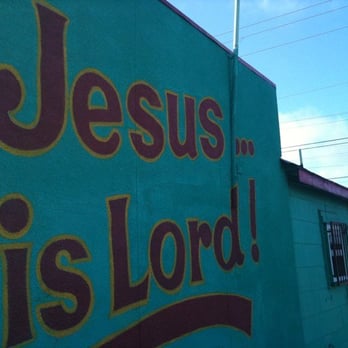 The tacos are, indeed, super. And the water glasses are comically oversized. (“Welcome back to America,” either Elizabeth or Noah says when a “Jesus, this is huge” reflexively escapes my lips.)

Stuffed to the gills, we continue to the cave, which is a jaw-dropping tourist trap of truly American proportions. I suppose when your cave is in the middle of uninhabited ranch land, you can spread out as much as you like; there are two different gift shops, some kind of zip line attraction, a maze, gem panning, and even a cafeteria.

The next tour leaves in about five minutes, giving us enough time to stroll over to the tour holding pen. This cave opts for the “tour guide at every station” model, which I like less than the “have a new friend and personal cave psychopomp for an hour” model, but given some of the hairpin turns in the path, I see why it’s run the way it is. I don’t fall, thankfully, though Noah almost does.

They have an obligatory photo spot, which Noah and Elizabeth resent—”even if they don’t sell your picture to you, they can use it in promotional material”—and so they strive to look as awful as possible when the flash goes off.

The cave itself is spectacular and miracle of miracles, my camera phone manages to capture some of the magic. I lose my mind repeatedly on the tour.

“Thank you for indulging my weirdo nerdy interests,” I say as we follow the walkway back to the main tourist campus of shops and food. I still have OMG CAVE HIGH thrumming through my veins.

“You’d do the same for me,” Noah replies.

“What would be the equivalent? That Eugene O’Neill play, I guess.”

We wait in the cafeteria for the bat tour to begin. There’s some short paperwork to sign, a waiver for something or other, and then we’re out on the patio for a short lecture on bats. The bat colony here are Mexican free tail bats; they don’t hibernate, so they haven’t been devastated by White Nose Syndrome like the little brown bats in PA. But the BCI volunteer touches on WNS, and other kinds of bats as well. She brings up the flying fox: “Do I have anyone here who’s six foot?”

“This guy is,” Elizabeth says, pointing at Noah. The BCI volunteer asks him to stand and hold his arms to demonstrate the wingspan of a flying fox. Elizabeth and I both crack up, and she snaps a picture of his demonstration. The volunteer moves on to other bat species and Noah sits down.

As we’re caravaning out to the cave where the bats will emerge, Elizabeth tells Noah, “I volunteered you to stand up because I knew you would love it. Everyone watching you? Perfect.”

The drive to the cave is surprisingly long, though we can’t be driving more than 20 mph, so that’s part of it.

“They could just be really efficient serial killers,” Elizabeth wonders as we drive. The rental car isn’t exactly made for off-roading; I think we all are fervently hoping that we don’t get a flat or suffer any other road maladies. The survives, and right away you can smell the presence of bat. Woof. It’s a short walk through the Texan scrub and then we’re at the mouth of a cave. Or not at, not entirely; we’re a few hundred feet back, separated by a gentle slope full of rocks and debris.

At ground level a few benches have been built to seat bat observers, and some artificial terraces. We make our way to the front-most ledge and sit and wait, while the BCI volunteer continues to inform us about the nearby wildlife and other bat facts.

We see a few flutters of individual bats here and there, and then eventually they’re out, like a bat vortex. They stream out and into some fields we can’t see to feed on assorted pests. After a few minutes of watching, the BCI volunteer announces that she’ll be leading people to the other side, right over the cave, so we can be right under the bats as they fly.

It’s a pretty amazing sight, though I’m mindful of the fact that we’re under animals and try to remember to not stand and gape with my mouth wide open. Don’t want to be a bat toilet!

“There is a river-like quality to their flight,” Noah agrees.

Again, I think of Vonnegut: If this isn’t nice, what is? “Not everything is a total garbage fire,” I comment, and Noah just laughs.

On our way out, we can still see bats silhouetted against the clouds in the vanishing daylight. According to the BCI volunteer, they can hit bursts of speed up to 100 mph. With the right wind and atmospheric conditions, I guess.

We pull back on the highway and listen to a podcast Elizabeth wanted to try out, The Babysitter’s Club Club. It’s two guys reading The Babysitter’s Club books, one for the first time and one for the first time since childhood. It suffers the usual podcast problem: desperately needs more editing and/or more scripting, and much of the episode is full of only moderately funny banter. We all pick it apart a little, and then Noah puts on another podcast for the second half of the trip home: Pop Culture Happy Hour.

As we wind in to Austin, food comes up. Noah is hungry; Elizabeth isn’t. (She had a huge platter at Rolando’s Super Tacos, Jesus is Lord.) Elizabeth drops us off at the all-purpose eatery Noah and I had patronized for breakfast on Friday and goes home herself. Noah gets loaded vegetarian nachos (tofu instead of bacon!) and I get a cider. We sit and talk about everything important and nothing in particular: friendships, relationships, anxieties, veganism. There’s no postponing the inevitable, though: we finish the nachos and my cider runs out and it’s definitely time to go home.

“Should we wake you up, or do you have an alarm?”

“I’ll set an alarm. Have I checked in?” Weird to phrase it like that, but since Noah bought the ticket, he’s the one who keeps getting the email reminders from Southwest.

“Yes, I did that this morning.”

A few minutes into me last-minute packing and double-checking everything, Noah drifts out of the bedroom. “Okay, so I didn’t actually check you in. I had the window open to take care of the airport cab, but I never hit the button. Should I send it to you, or…?”

I wave him way. “You can just do it yourself, it’s fine.” If my flight back is overbooked and I get bumped to a later one, I don’t really care so much.

My things are packed as best as they can be with me still in pajamas. I double-check my alarm (poor form to miss a flight someone else has paid for), and then drift off to sleep.