When I moved to Sweden I brought a handful of my favorite children’s, middle grade, and young adult books with me. My motivation was largely nostalgic, but they ended up being useful resources when tutoring.

Sam the Cat: Detective is one that never made an appearance at a lesson. I didn’t have any really cat-obsessed students and I’m not entirely sure all of the detective and noir style elements would have been a productive challenge. In fact, I didn’t re-read it until just a couple weeks ago, when I read it out loud to my sambo over a weekend. (His new-found appreciation for audiobooks means that he also enjoys me reading out loud to him; this is hardly the first book we’ve enjoyed together like this.) 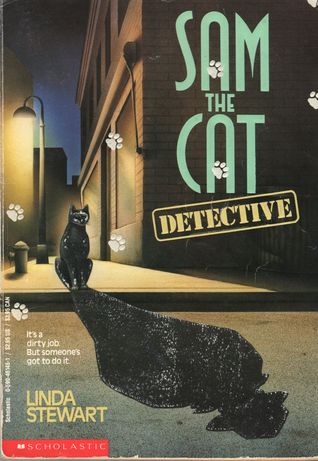 I distinctly remember loving the hell out of this book as a kid, to the point where I read it multiple times. I generally don’t get much out of re-reading books until I’ve all but forgotten them, and the same was true for me as a kid, so reading any book more than once was a rarity. What stuck in my memory was the noir-style tone, a couple essential vocabulary words (“fence,” as in a buyer of stolen goods; “cat burglar” (because of course) and very likely “dumbwaiter”) and a very chaotic showdown at the end where a cat burglar is foiled and apprehended by a dozen neighborhood cats.

It turns out adult me also loved the hell out of this book, though maybe not for all of the same reasons.

The writing is definitely a very self-aware hard-boiled detective…homage? parody?…that’s suitable for kids but in no way condescending or dumbed down. At 8 years old I wouldn’t have been conversant with Raymond Chandler or Dashiell Hammett, of course, but kids can tell when there’s very Smart Grown-Up Stuff at work (except when they can’t; at the same age I didn’t realize Get Smart was supposed to be funny) and the sense that there was Smart Grown-Up Stuff was without a doubt what a large part of the appeal was for me. There are also jokes for the grown-ups in there, for the parents who would have inevitably been reading this to their kids at bedtime, including an acrobat troupe of cats called Wang, Chang, Sturm, and Drang. And while yes, it’s definitely a play on the old Chinese circus acrobats trope, the cats don’t speak in broken English or cringe-y dialect.

The mystery isn’t bad either. An adult reading it, especially an adult who’s read at least one detective novel in their life, will probably figure out the bulk of the mystery by the time it’s done being set up, but what you lose in the obvious nature of the mystery qua mystery, you gain in appreciation for Stewart’s technical accomplishment in the whole package. The cats are able to solve the mystery faster than the cops because of their different perspective; the story logic doesn’t rely on the target demographic being children. They also have an imaginative and genuinely adorable parallel cat world, with cat celebrities (in this case, cat food commercial animal actors) and cats running businesses like detective agencies and salons, paying each other in cat food and information about humans that feed strays but also very casually making use of telephones, computers, and microwaves. Stewart and her editor also do an excellent job of succinctly explaining the more advanced or specialized vocabulary in a way that fits in smoothly with the rest of the narration, usually with a joke when possible (“Personally, I always thought a dumbwaiter was a server at the restaurant who spilled the wrong kind of soup in your lap…”) Plus, semi-colons. Hallelujah! Just because your book is for children doesn’t mean your prose needs to be dull and repetitive.

Adults who never read it in childhood might not love it the way that I did if they read it now, but that’s okay. I still love it, and that’s all that matters.