We hit the road early the next morning, while Theophanes’s brother and his girlfriend and her nieces were still asleep. First order of business: a picture of this thrift store sign, which caught my eye even on the delirious and sleep-deprived drive up in the middle of the night. Unless Mildred Wymen was really into Stephen King? Orthography is hard! 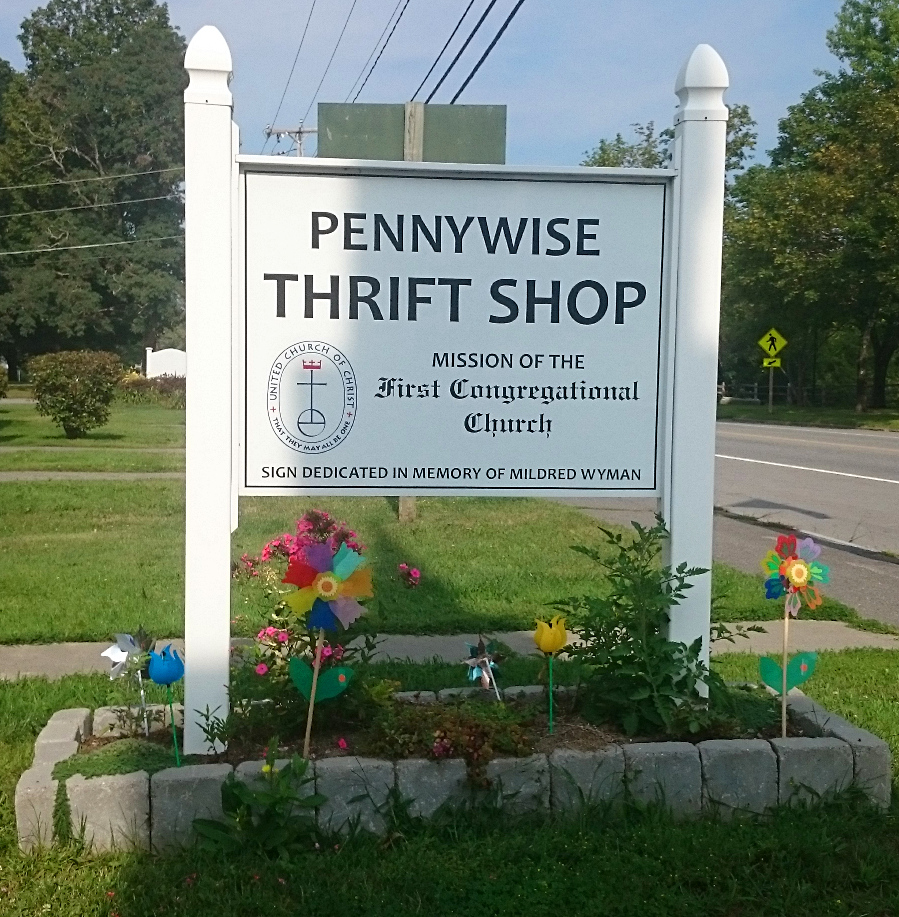 Then breakfast at a greasy spoon and we were off to Concord! 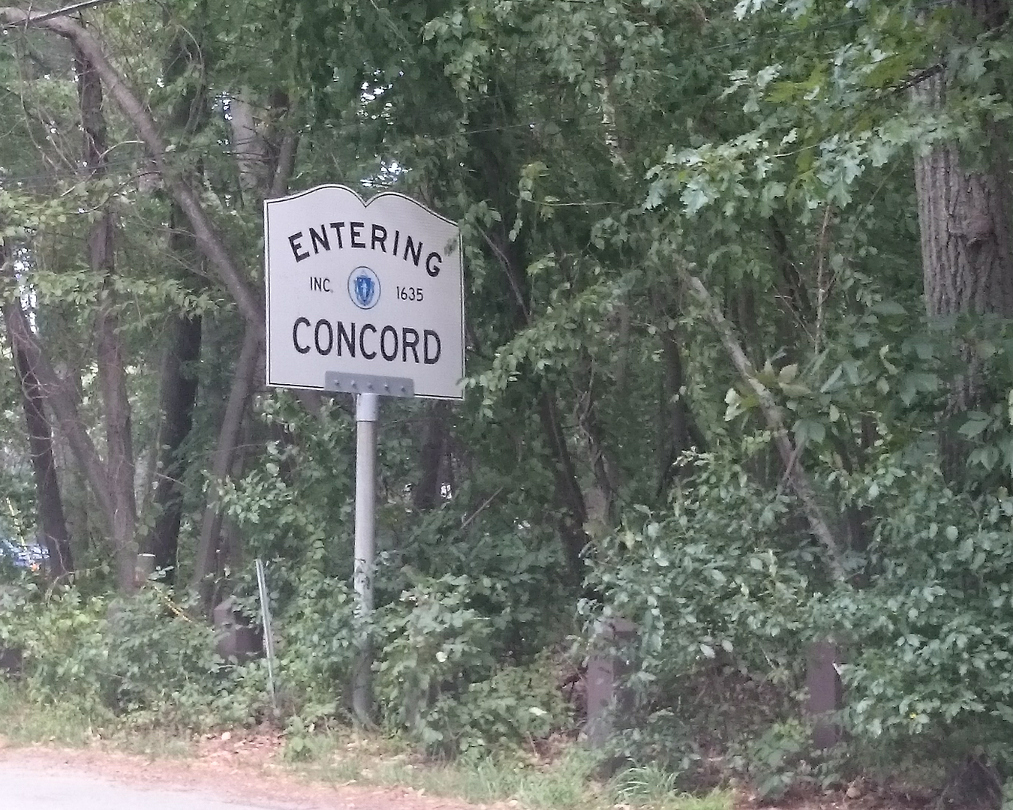 I was originally going to bus down from Maine to Boston, but Theophanes  volunteered to drive and do Boda Borg with me and my hostess with the mostess in Boston, Diana. I broached the subject of stopping by Walden Pond on the drive down, since it wasn’t too out of the way and I didn’t know when I’d be in New England again. (I mean, I’m sure I will be—I just don’t know when.) She puzzled it over in the GPS and agreed, since it wasn’t ridiculously out of the way. It just would have been a little far for a day trip from the cabin. 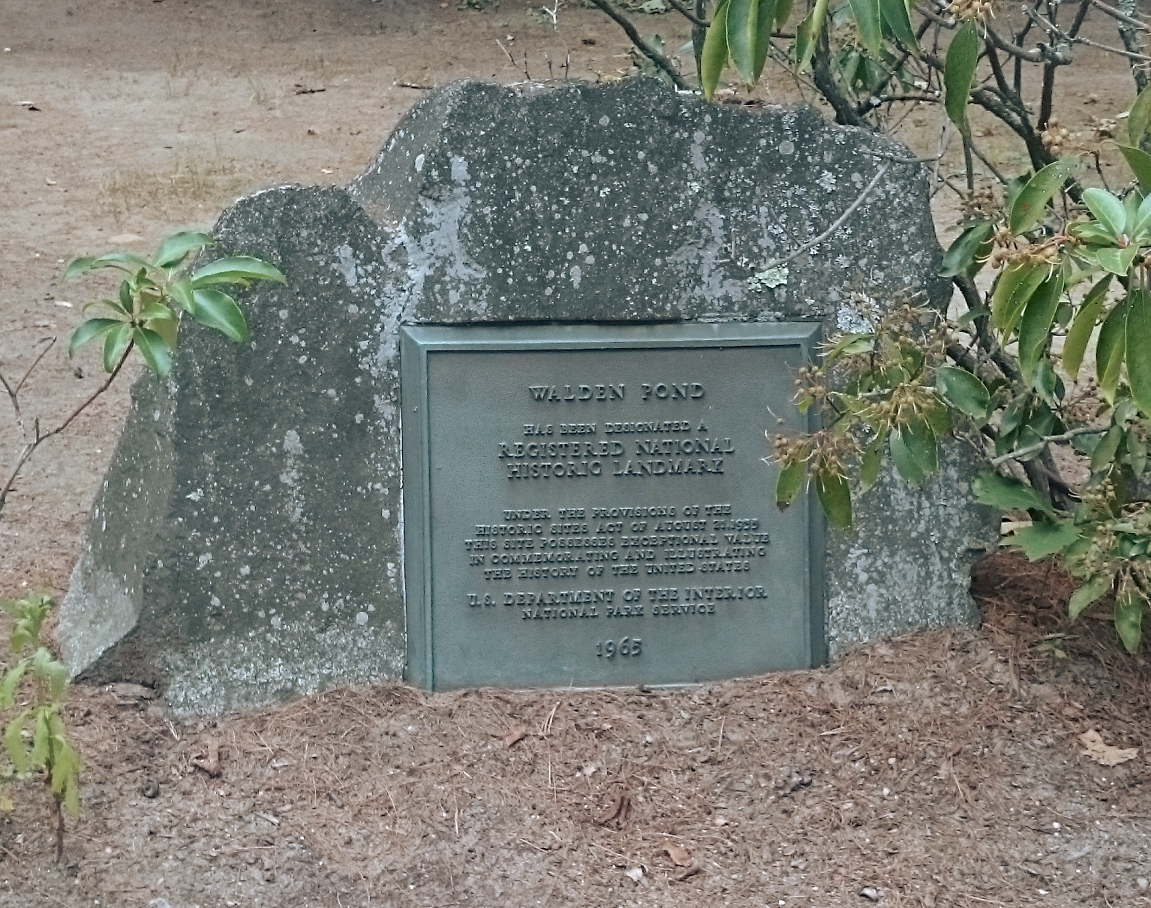 It’s really hip these days, at least among the people I like and admire, to hate on Thoreau and Walden. And I guess I get it—he was only able to stay at the cabin as long as he did because of the good graces of other people and he was an obnoxious houseguest to boot, he’s maybe (even inadvertently) the foundation of modern American libertarianism, he was kind of a pompous ass, etc. etc.—but for a weird, thoughtful kid in high school to read about this dude being weird and thoughtful by himself in the woods was reassuring. Even as I drink tea and continue to use a doormat. 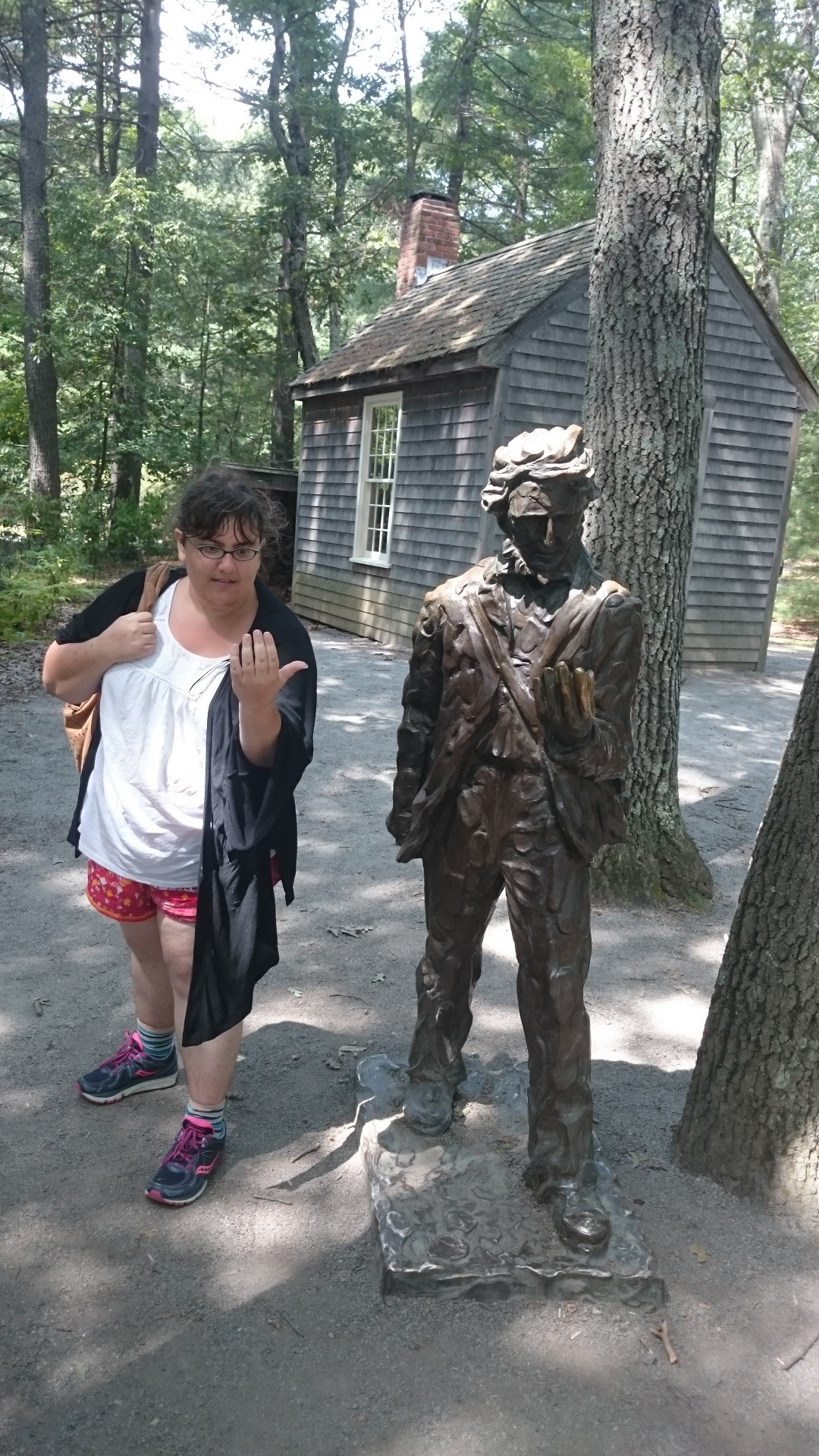 I was surprised to see so many parents of very small children trying to do the educational, dutiful thing and go through the assorted signs and the replica cabin and whatever tourist center is also on-site (we didn’t visit it, though). Maybe I’m underestimating kids, but I don’t think a 6-year-old is going to be super interested in, or at least appreciative of, someone living by themselves in the woods. I’m pretty sure they just want to go swimming in the damn lake. 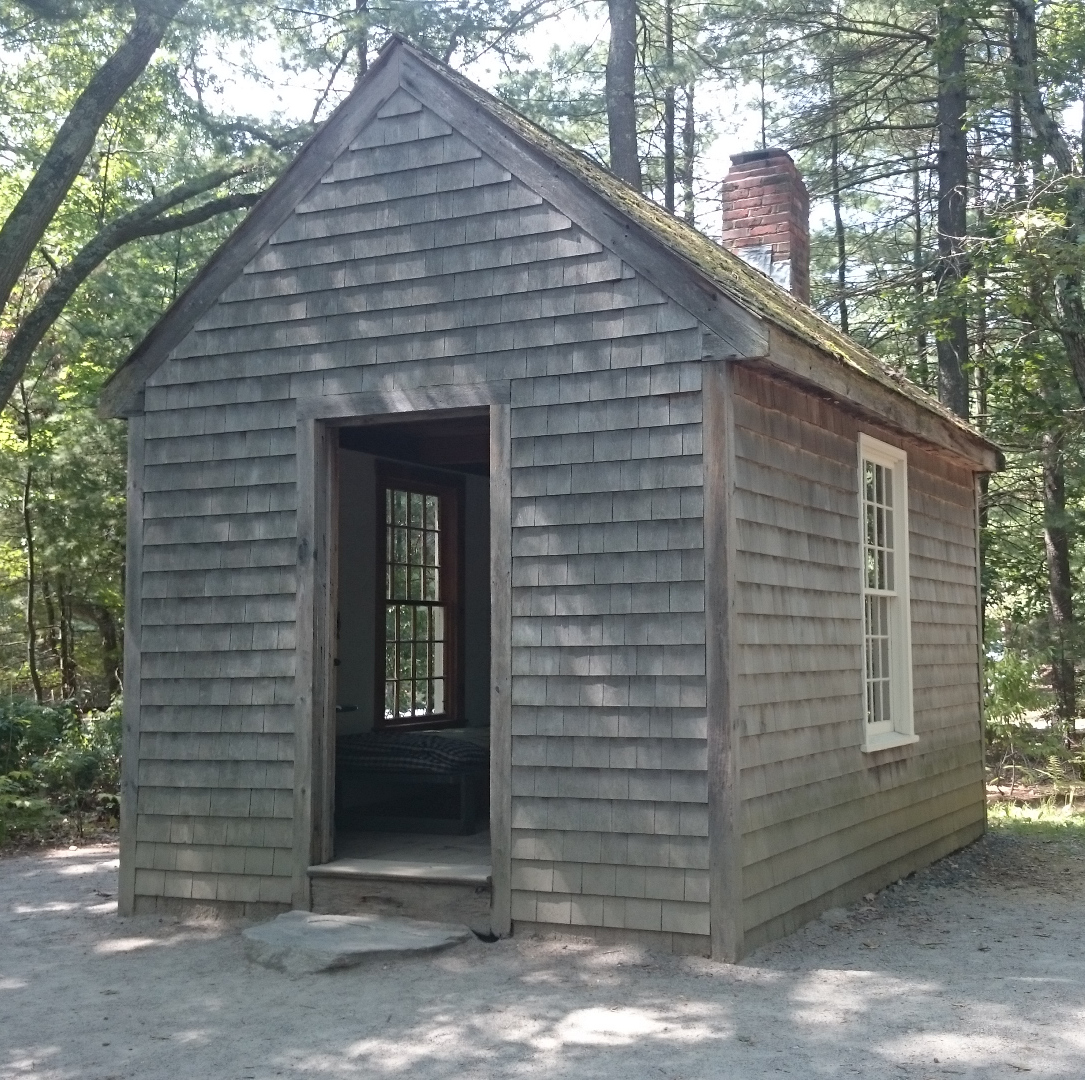 I have to admit, sometimes a cabin out in the woods sounds like the most appealing thing I can imagine. We peeked inside and it was easy to imagine me holing up in such a space for the rest of my days. Maybe in a place a little bigger, only because I’m less stingy than Thoreau when it comes to books worth holding on to.

It was then very weird to see that the plot of land where he went to live simply, away from people and society, so filled with people. In addition to all of the signage and statuary and sites associated with Thoreau, the pond itself is now a local swimming hole. The sound of people talking and laughing and splashing in the water was the background sound for most of the trip. Incongruous, but at the same time, maybe it’s better that such a spot be appreciated by the general public rather than forgotten. 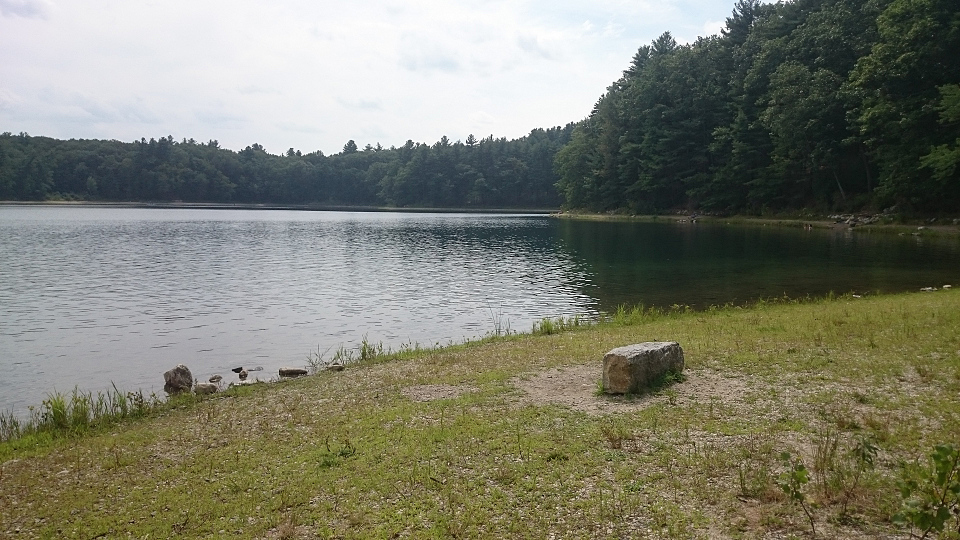 (I still did my best to get this picture of the lake without any people in the shot, though.)

There were also these assorted illustrations from some kind of Walden ABCs book where I’m not sure if it’s actually for kids, or a kids’ book for adults (a la Go the Fuck to Sleep), along the assorted paths. This was by far the reach-iest one of them all: 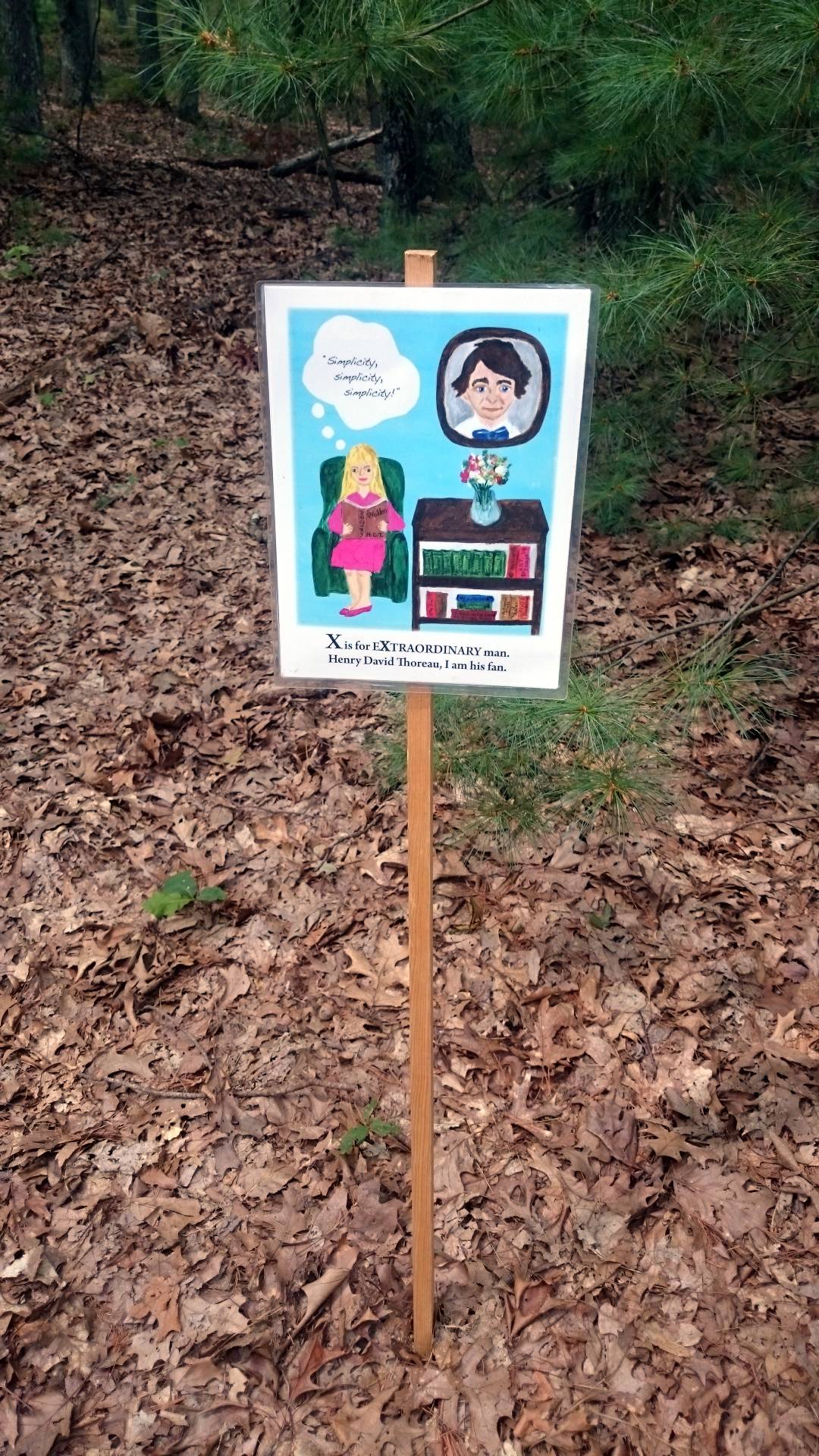 and I, when we saw the first one (“C” or something), started speculating as to what they’d do for the trickier letters. I thought “X” would be for “fox,” but no. “Z” either was or should have been “zephyr.” I was right, though, that “Q” would of course be “quiet.” 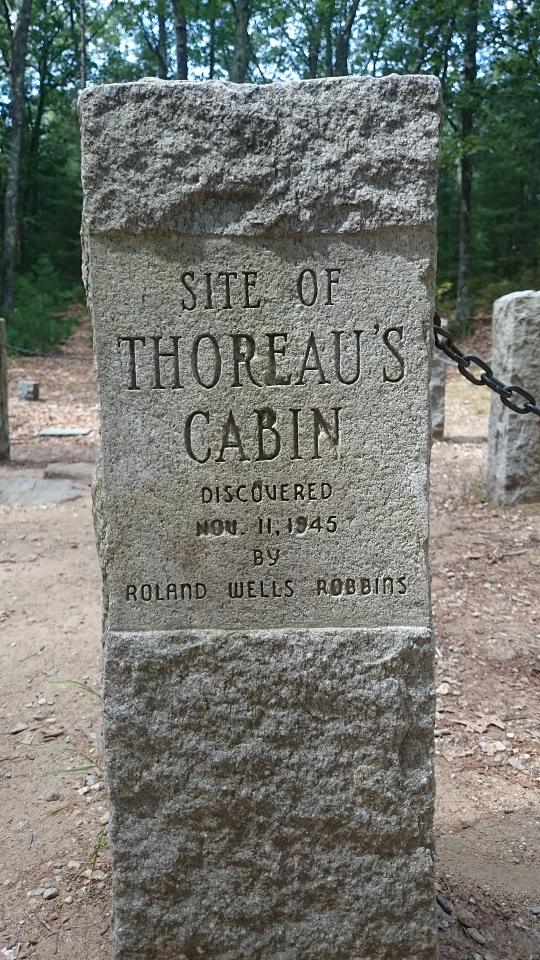 If the pond and the museum-type stuff was relatively packed and full of people, the site of the actual cabin was mercifully quiet. Theophanes pointed out that many of the trees in the area were fairly young, so one wonders what happened to the patch of forest between when Thoreau was here and when the site was discovered in 1945. (Or perhaps it was never actually discovered; perhaps that’s just a random spot along the lake that they decided to declare Thoreau’s Cabin in order to give visitors something concrete to experience.) 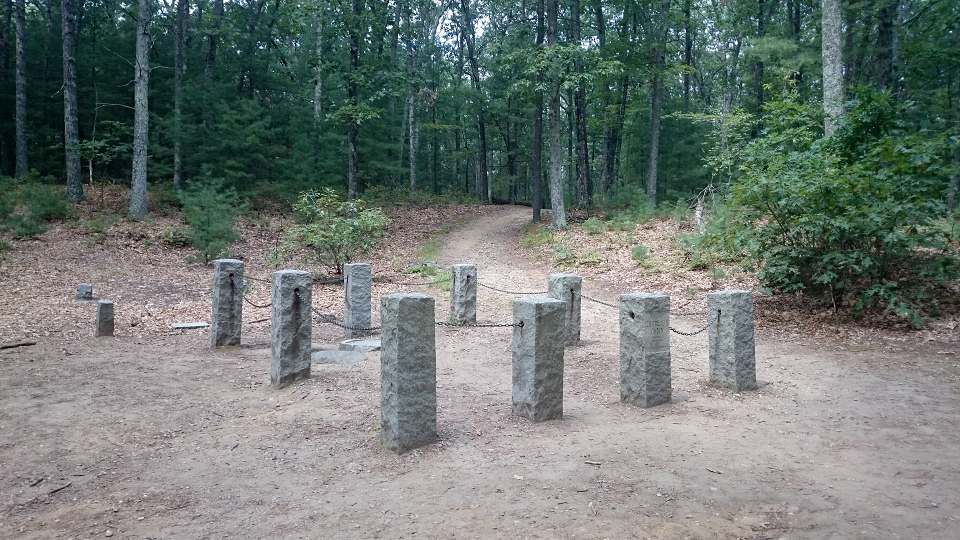 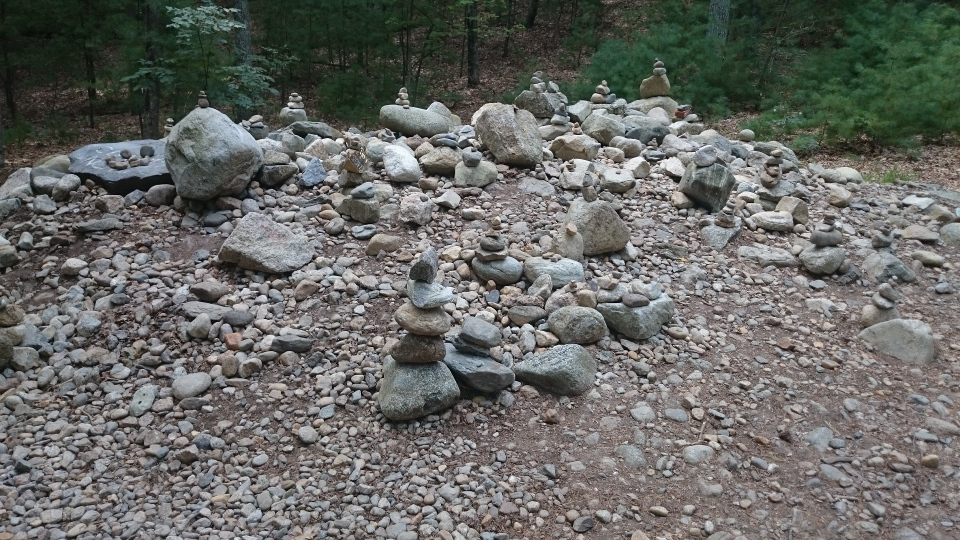 People also left little stacks of stones next to the cabin. For me, this is something people do in Korea (maybe East Asia?). I saw this all the time, especially in temples; from my understanding, it’s part of a folk Buddhist tradition that has to do with making wishes or requests. (Do ones this small still count as cairns?) For example, here are some I saw by Cheonjiyeon falls in Jeju in July, 2012: 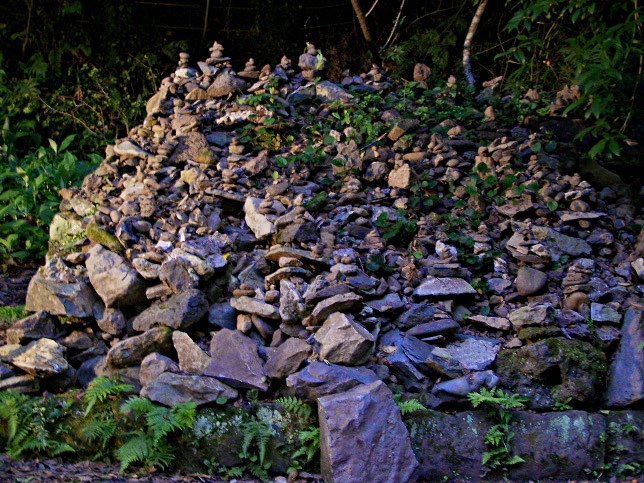 And an anonymous Korean woman building one at Bulguksa in Gyeongju, January, 2010: 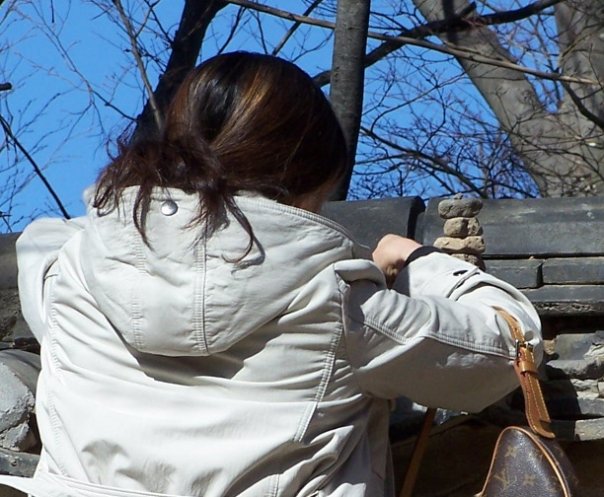 And yet maybe last year or two years ago, my crunchy granola friends started sharing articles like this one, as if making those tiny towers had suddenly become a widespread Thing in the US as well. It was certainly a Thing at Walden, anyway, and I left my own, because it’s a way for me to connect my time in Korea with the places I visit elsewhere. 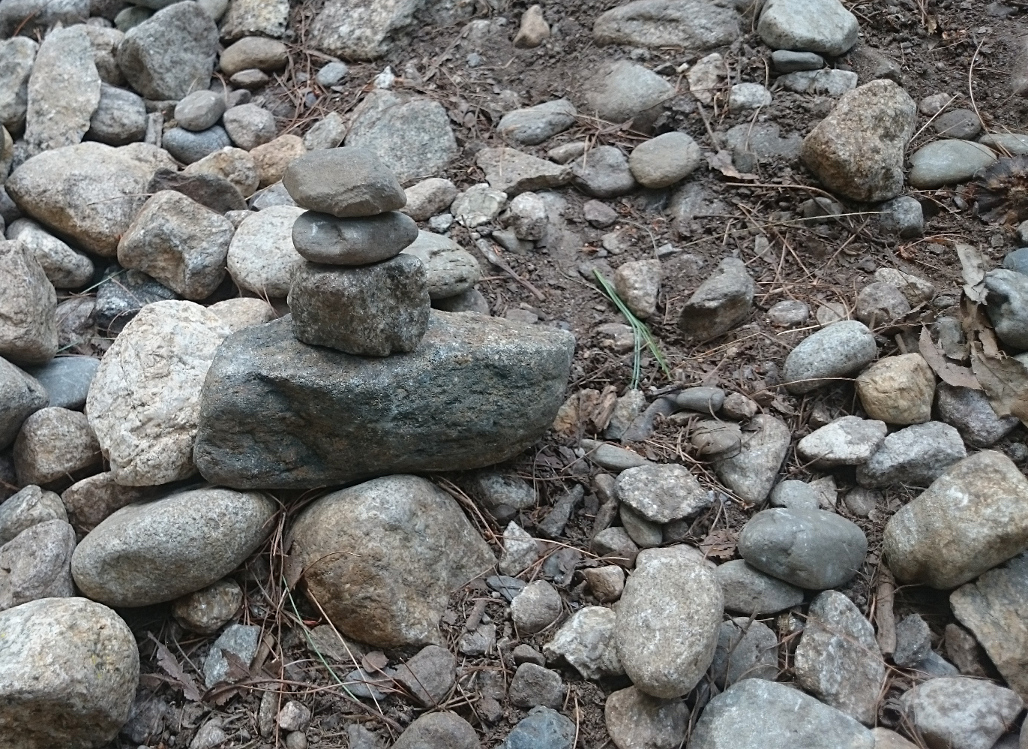 Other people left messages or drawings on stones, which I hadn’t seen in Korea. (Though at temples, you can buy a roof tile for X amount of won and leave a message on it.) 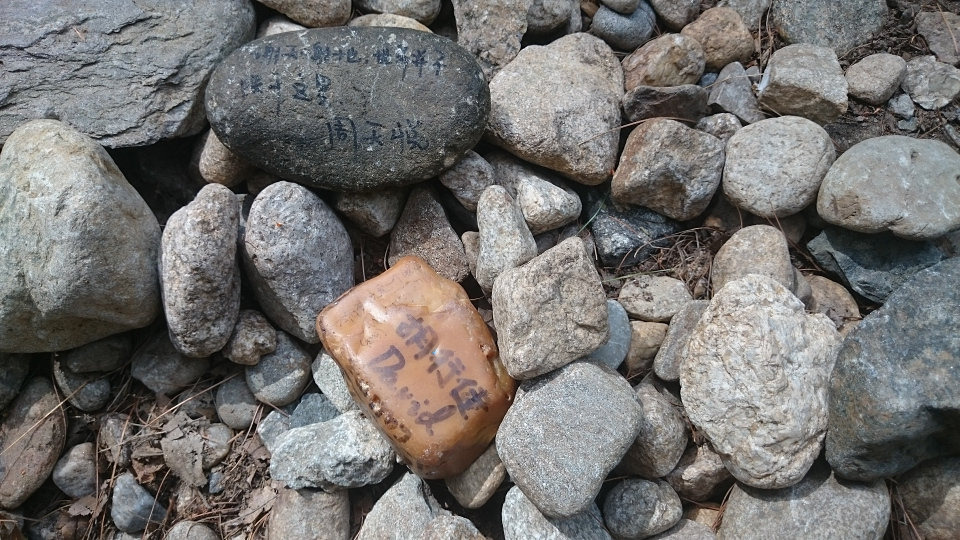 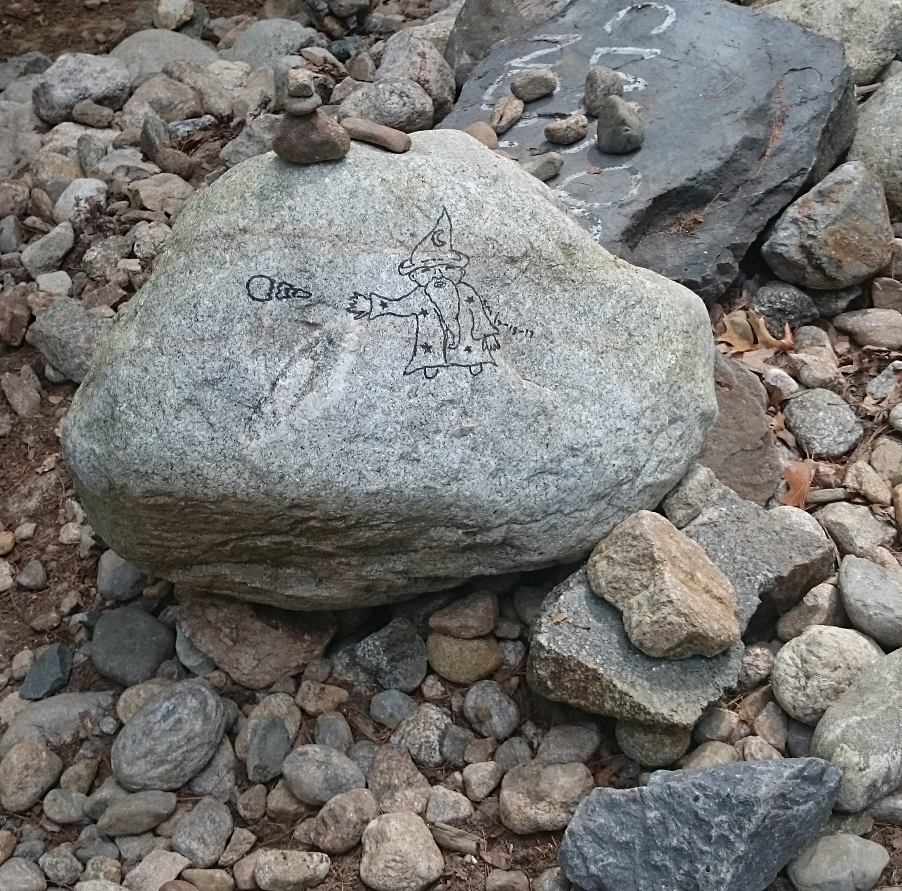 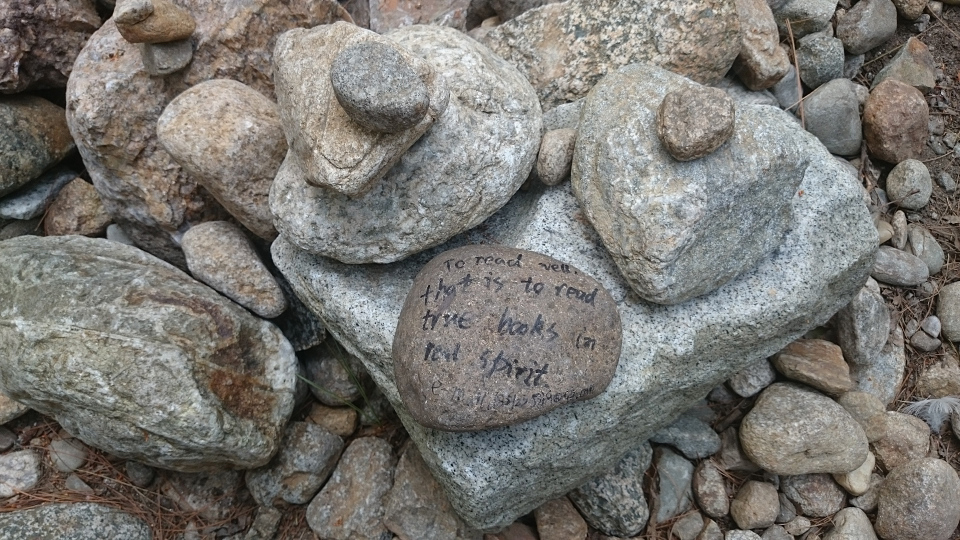 The weather was warm enough that by the time we were back at the lake I was regretting leaving my bathing suit in the car; Theophanes as if reading my mind, said, apropos of nothing, “I’m going to take off my shoes and dip my feet in.” I followed suit. The rocky shore of the lake made the barefoot journey less than appealing, but the payoff was worth it. The water was ice cold and stung pleasantly at the myriad mosquito bites I had acquired at the wedding (open-toed shoes and a knee-length dress means lunchtime for bugs). We stood in silence for a while and watched some small fish come and dart around our ankles. I splashed some of the water on my arms and face and filled up a tiny pocket of my heart with the experience to draw on later, when I feel like garbage. I also picked up a white piece of something (quartz? marble? I’m a bad junior geologist, guys!) as a souvenir.

When we used to visit Emerald Lake State Park as a family, I (and maybe my brother?) would always want to take home a rock or two from the bottom of the lake. Dad, a former Boy Scout and adherent to the “leave it better than you found it” ethos, would always make us put them back: “What if everyone took one? There’d be nothing left!” (I totally managed to get one out with me once, still, when I was maybe eight.)

The thought crossed my mind as I washed the grime off the rock and dried it with my shirt: “What if everyone took one?” I’m an adult now, and that means I get to violate Boy Scout prescriptions on nature preservation whenever I want!

Diana had been anticipating watching the eclipse with us (this was the day of the eclipse), but we ended up spending it at Walden instead, which I’m kind of okay with. Spending a significant astronomical event at a site that’s personally meaningful is a pretty okay way to spend it, in the end.

Another friend from the wedding, Walter, wanted to meet up in Boston once he knew that’s where I was going, but he couldn’t make it out in time for Boda Borg, so it ended up being just me, Diana, and Theophanes. This was probably for the best—they say “up to five” in the groups, but anything more than three people would have been cramped, really. It was my and Theophanes’s first escape room and I suppose we did OK, although the first room we picked was obnoxious and we couldn’t get it. Fortunately, it seemed to be way harder than many of the other rooms, and we still managed to solve a few puzzles and pick up a few stamps.

Before Boda Borg was Vietnamese food and introductions. Afterwards was boba tea and farewells. Theophanes was off to her mother in Rindge, not super far from Boston (certainly closer than the Maine cabin). and I spent the rest of the evening with Diana watching The French Revolution episode of The Supersizers Eat and talking about stuff. I left most of a six-pack of Yuengling (I am trash and love my regional PA trash beer that would be prohibitively expensive and thus pointless to acquire here) and the last of my roadtrip music (Black Masala, Gangstagrass, and I think also Galactic?) in exchange for an autographed stand-up album. Before we hit the hay, I solidified plans with people the next day: lunch with Diana and Walter, then later meeting up with a blogger buddy  before the long flight home.

And like the other Maine parts of my trip, Theophanes also wrote about it. There are a lot more pictures of Walden and some more details about Boda Borg over on her blog.