Since the cabin was about two hours from Old Orchard Beach, we hit the road relatively early for bagels and other goodies at Aaron’s aunt’s house. Everyone else had made plans amongst themselves;  Theophanes and I had decided yesterday to visit the International Cryptozoology Museum. One of my Hamilton friend’s boyfriend has been there before: “It’s just, like, two rooms of stuff, and this guy following you around, telling you how Bigfoot is real. One of the display is, like, a GI Joe doll standing next to a stuffed beaver to show how large giant beavers are supposed to be.” He laughed and shakes his head; Theophanes and I looked at each other like YESSSSSS. That is definitely what we’re doing next.

Her GPS didn’t have an updated address for the International Cryptozoology Museum, which unbeknownst to us had moved to some old warehouse unit behind the Greyhound station, so we had a nice little wander around downtown Portland. 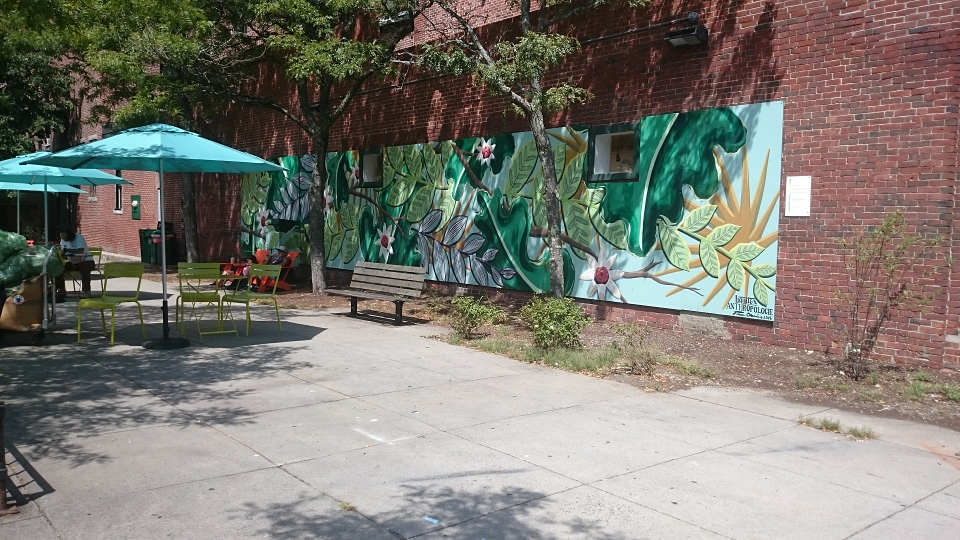 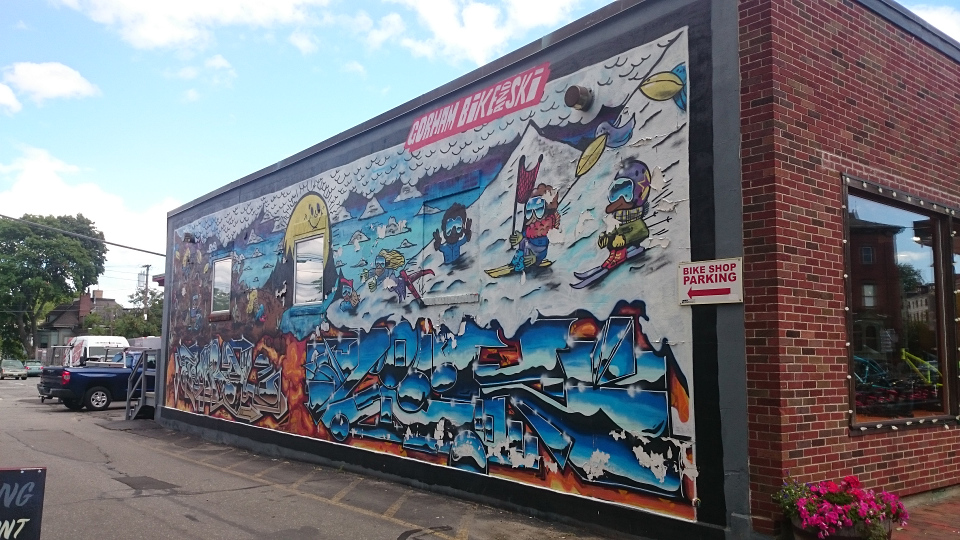 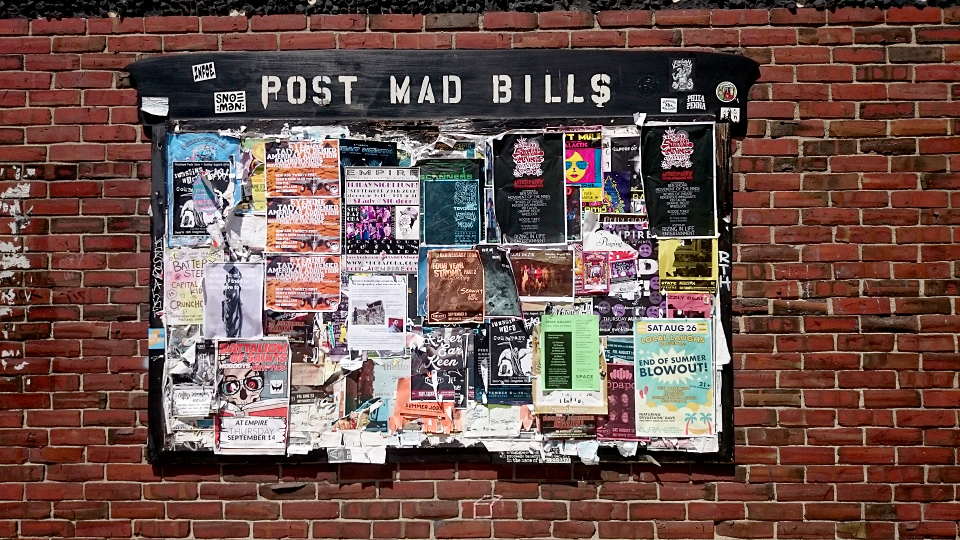 It was a cozy little wander full of graffiti and politically-minded stickers. 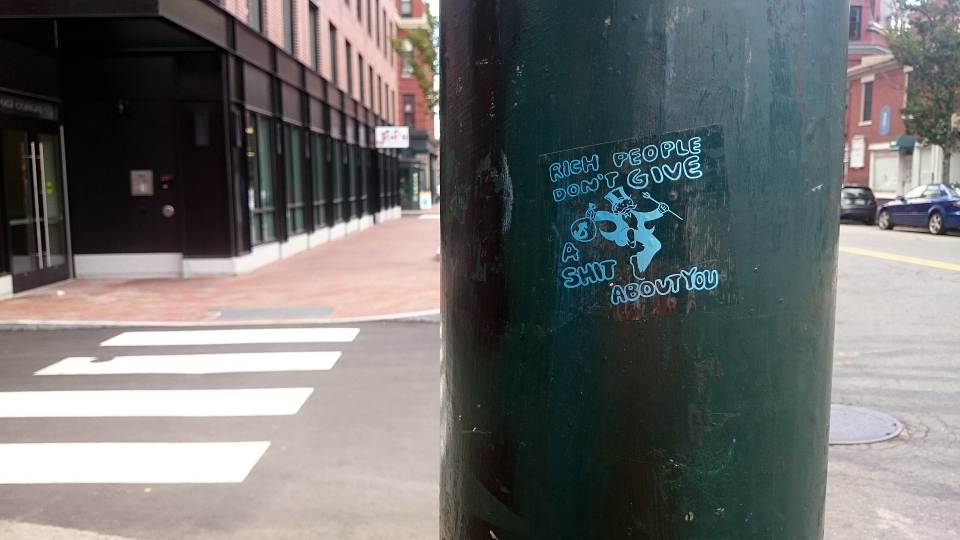 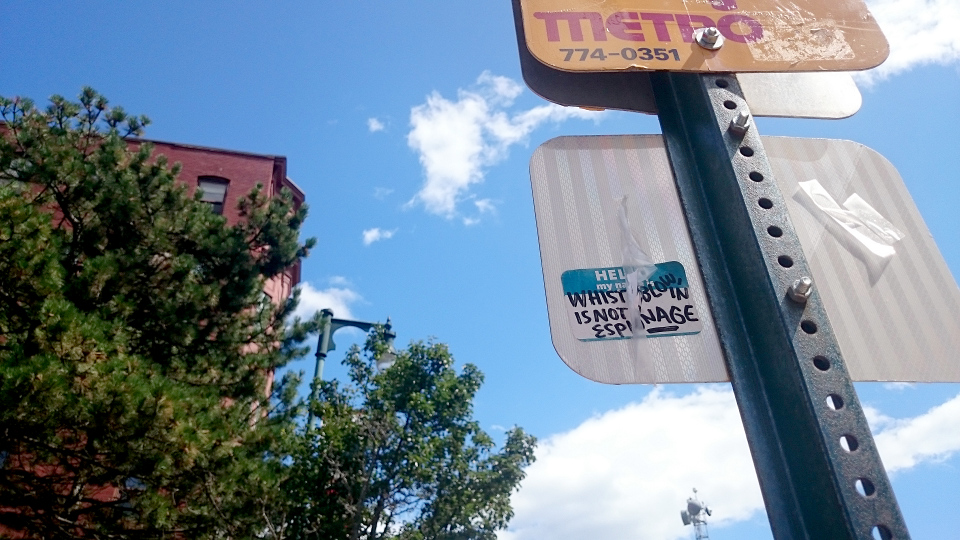 I felt at home here; I could imagine myself in Portland (if I ever wanted to leave Stockholm). As I texted my friend back in Austin: “The dream of the 90s is alive in Portland ME, too.”

For our one and only actual stop in downtown, we visited The Green Hand and despite the incredibly temptation I resisted the urge to buy books. Still, I wanted to get something, so I bought a little High Priestess pin and a ton of postcards.

They very conveniently had a poster by the register with directions to the new location of The International Cryptozoology Museum, so we realized our mistake and (after a fight with the parking garage) were able to rectify it.

We had a little trouble finding the museum once we were on the warehouse campus—we literally walked right past it and didn’t see it until we turned around—but we were still there before closing. It was everything I love in a tourist trap: weird and kind of grubby but incredibly enthusiastic. It’s situated in a weird place; it splits the warehouse room with a fried chicken restaurant, so we had to walk through another place to find the entrance. (It has its own door, too, but on the other side of the building.) We watched the little introductory video by the founder first (Loren Coleman, no doubt the “creepy dude” mentioned earlier), then I paid for our tickets and we explored.

The first floor is a riot of assorted mounted weirdnesses—this is the “hoax” section, which the video explains is included because the founder wants you “to be critical and skeptical.” It includes Fiji mermaids and Jackalopes and so on. 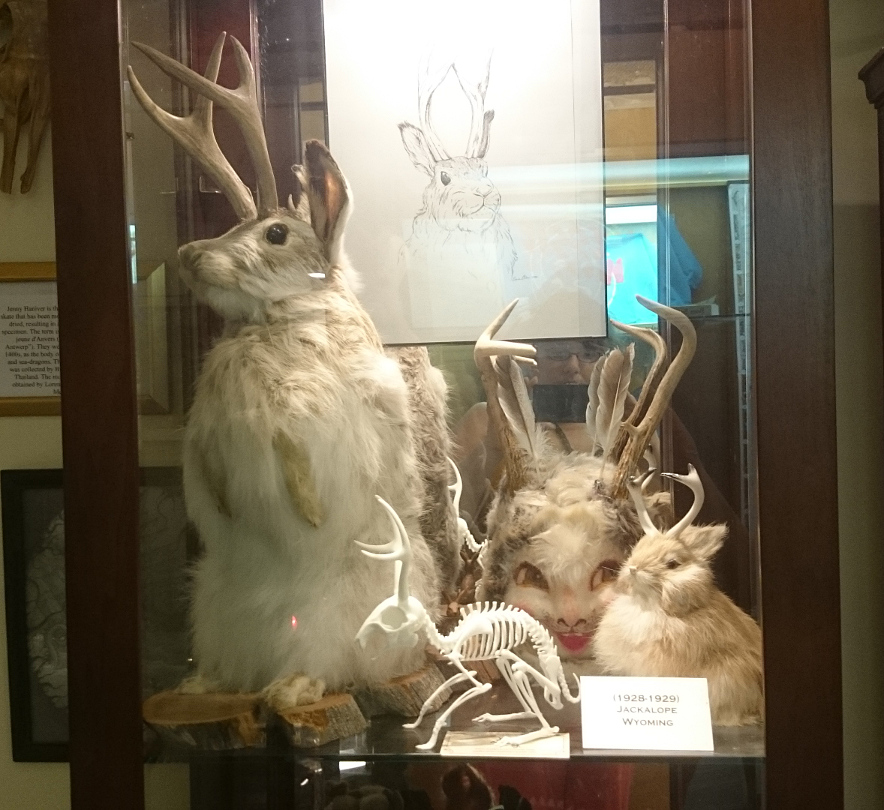 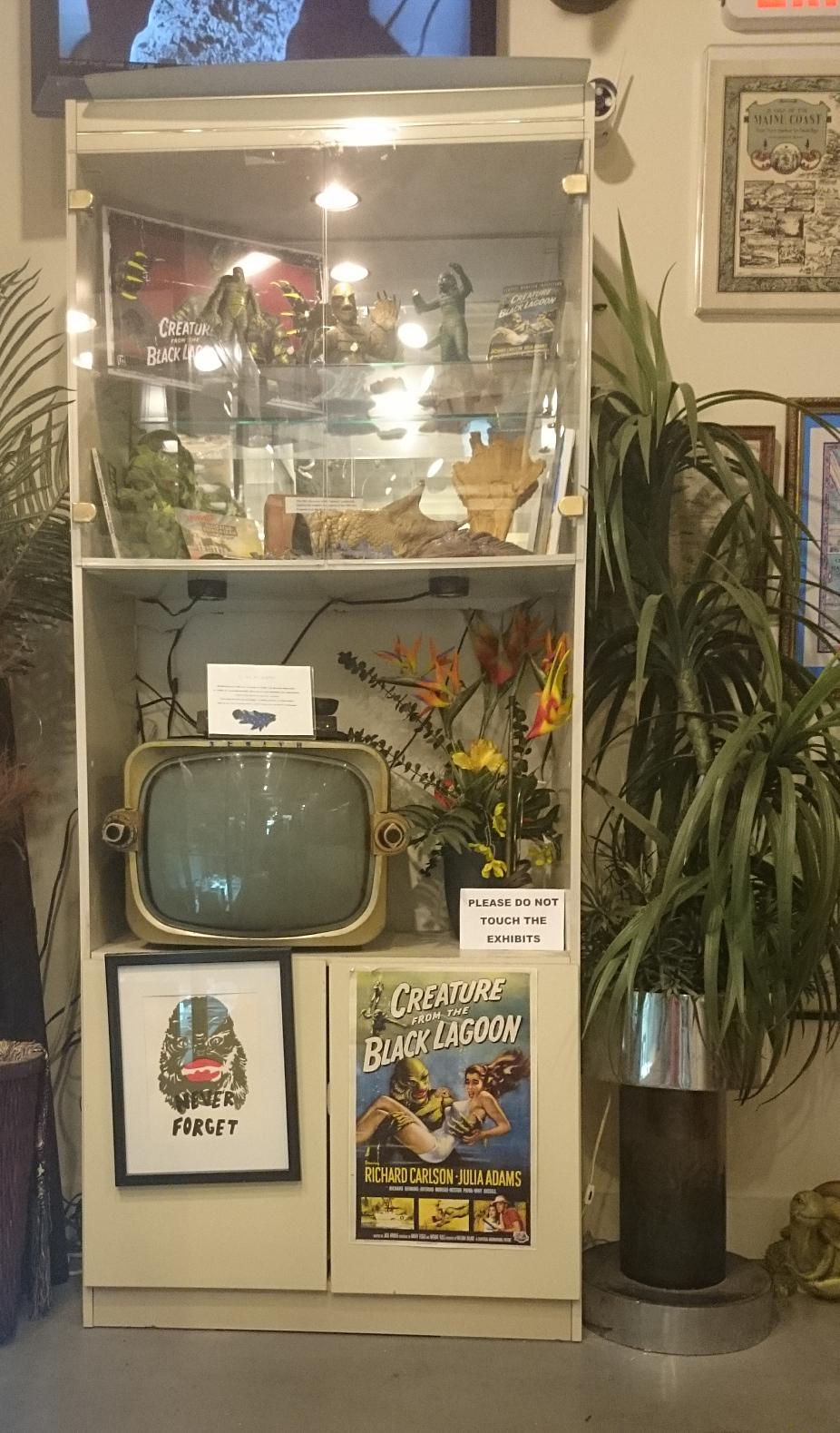 And bits about assorted species once considered mythical that turned out to be real: mountain gorillas, etc.

Upstairs is dedicated to hominids and the founder’s little shrine to himself and assorted cryptid kitsch. 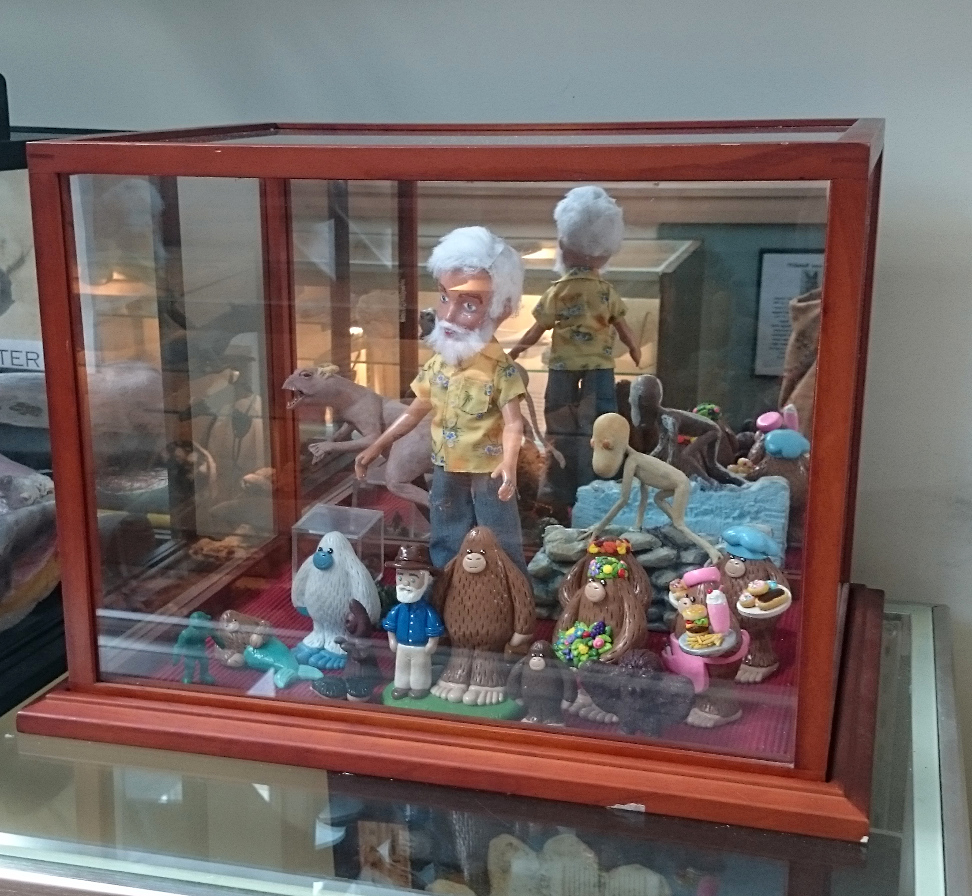 The museum It reminded me, a little, of The Museum of Jurassic Technology in LA, in that these are both vanity-ish projects that are kind of the crystallized, refined essence of what makes their founders tick. Only The Museum of Jurassic Technology isn’t really self-aggrandizing about it and is much more about “here’s this stuff I like!” The International Cryptozoology Museum is a little more, “Here’s me, and here’s the stuff that made me famous.” Anything that made him famous: an overhead LED light that was used on a camping trip when he potentially saw Bigfoot, the computer Coleman used to write his first book on cryptozoology, that sort of thing. A wall-mounted TV plays a video of his appearance on some show or other (but we didn’t stay long enough to find out if it loops).

They have a photo op set up, and naturally we availed ourselves of it. 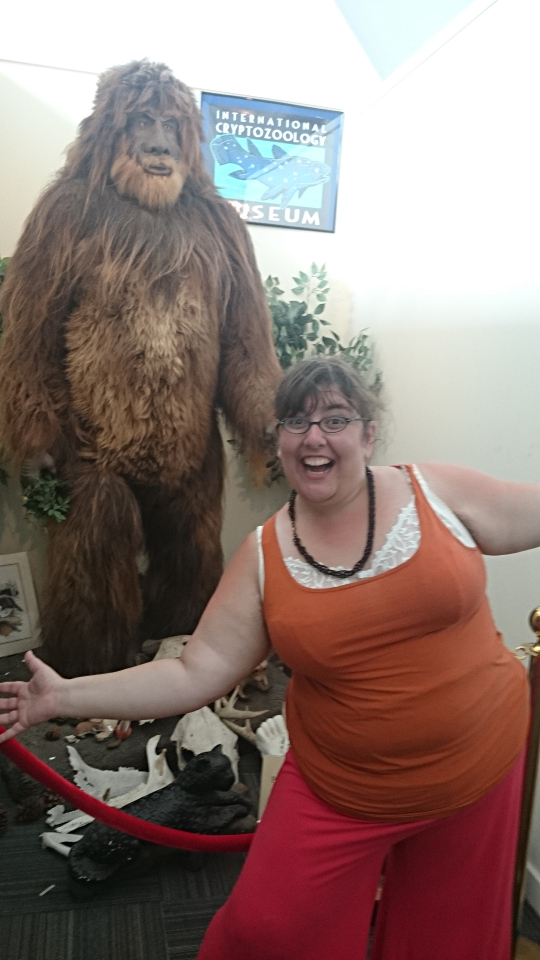 I spend my last remaining pocket change on a postcard in the gift shop and we decided to try to the deep-fried PB & J food truck we saw while we were trying to find the museum. 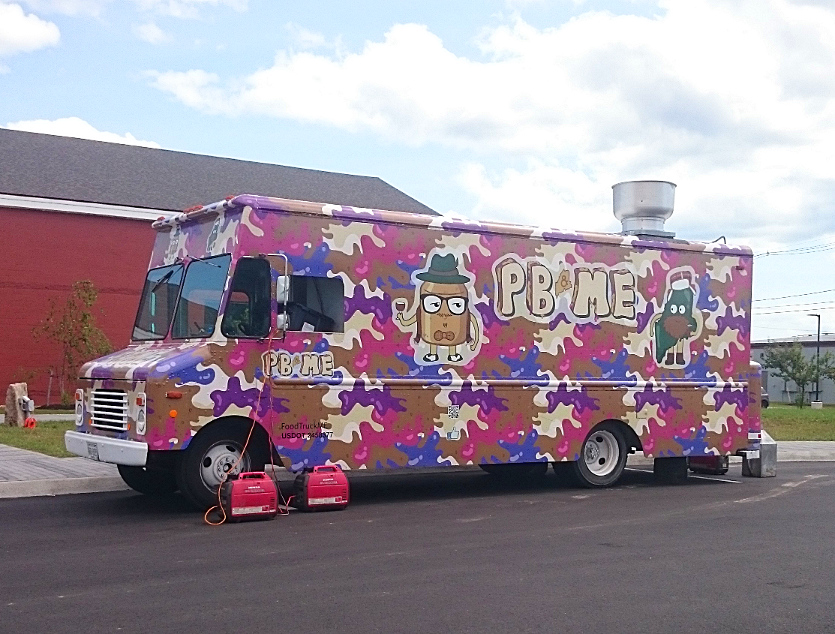 Everything sounded really good, or at least really interesting; I settled on a sort of sample platter that’s half a regular (deep-fried) PB & J and half something called a S’More: no peanut butter or jelly, but fluff and something vaguely Nutella ish. We chatted for a little bit with another customer, who was maybe itching to talk to people and so when he heard me give my name for the order opened up with a story about a woman he knew who was named, for real, “Katherine Katherine.” We talked about unusual names and doping in sports and NASCAR and then our sandwiches were ready, so we took our leave and give them a try. 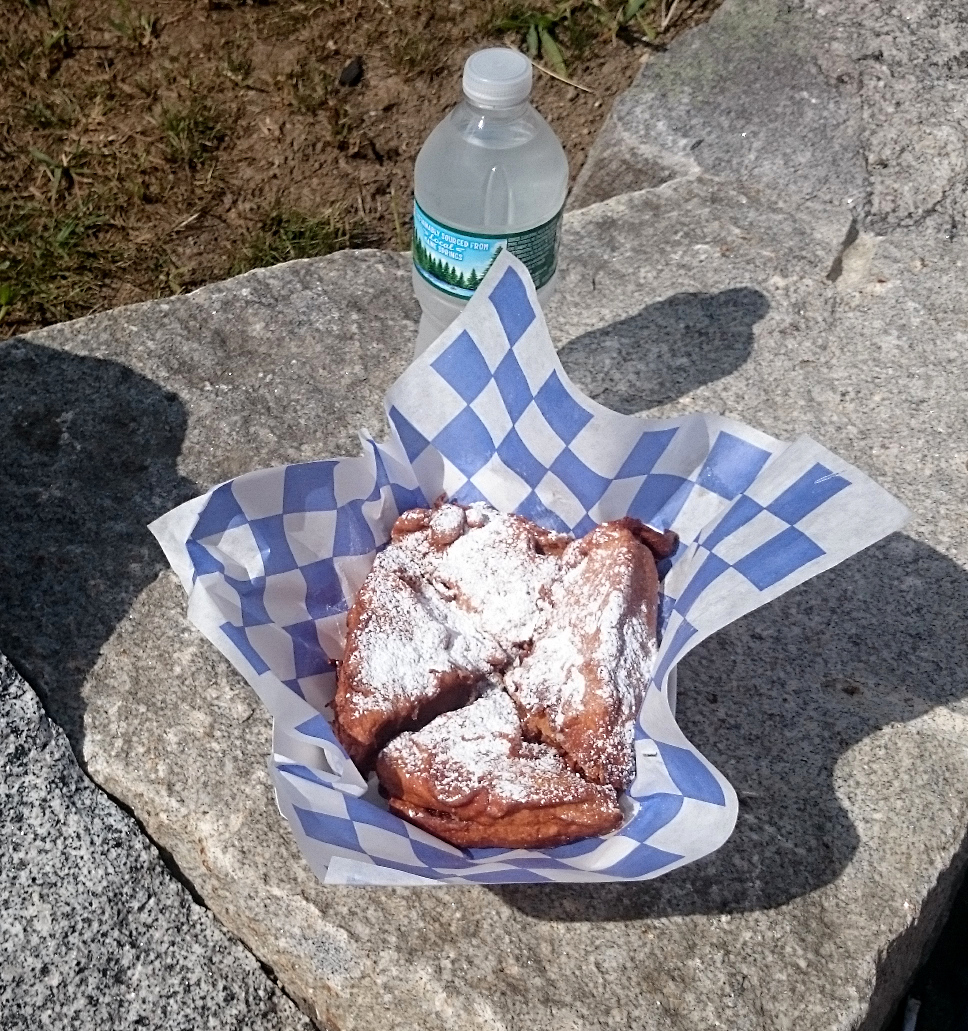 The cook in the truck helpfully pointed out which sample was which; I decided to start with the s’more sandwich since the PB & J seemed to be the flagship standard. The s’more one was an absolute delight; the PB & J less so, if only because the jelly seemed to have more or less evaporated with the heat of the deep fryer, so it was essentially a warm peanut butter sandwich with powdered sugar on top.

But the s’mores one was SO DAMN GOOD.

Hunger sated, we headed back to the car to decide what our next stop for the day would be. Theophanes  had a couple suggestions, and we eventually decided on Fort McClary because it was the closest one to us. It was still an hour away, about, but we had time.

Some people from your childhood, if you meet them again as adults it’s weird and you have nothing in common with them anymore and you struggle to understand why you were ever friends to begin with. Maybe sometimes you kept an inseparable circle of BFFs. Visiting Theophanes with is somewhere in the middle. Thanks to Facebook, we’ve more or less kept tabs on each other, though we never interact one-on-one. But in person it’s fine, and it’s not weird, and it’s like: here’s this person who’s known you, if not always very deeply, forever. We drove a lot and what could have been long, uncomfortable car rides with a virtual stranger are perfectly comfortable. Silences occur and are natural, but most of the time there was easygoing conversation.

We poked around Fort McClary without paying the “suggested donation” because we’re rebels. This is all you need to know about Fort McClary: 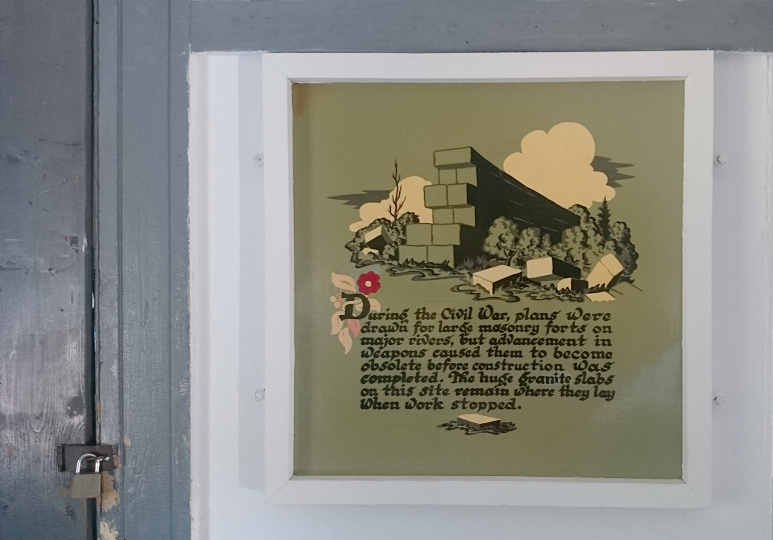 “During the Civil War, plans were drawn for large masonry forts on major rivers, but advancement in weapons caused them to become obsolete before construction was completed. The huge granite slabs on this site remain where they lay when work stopped.” 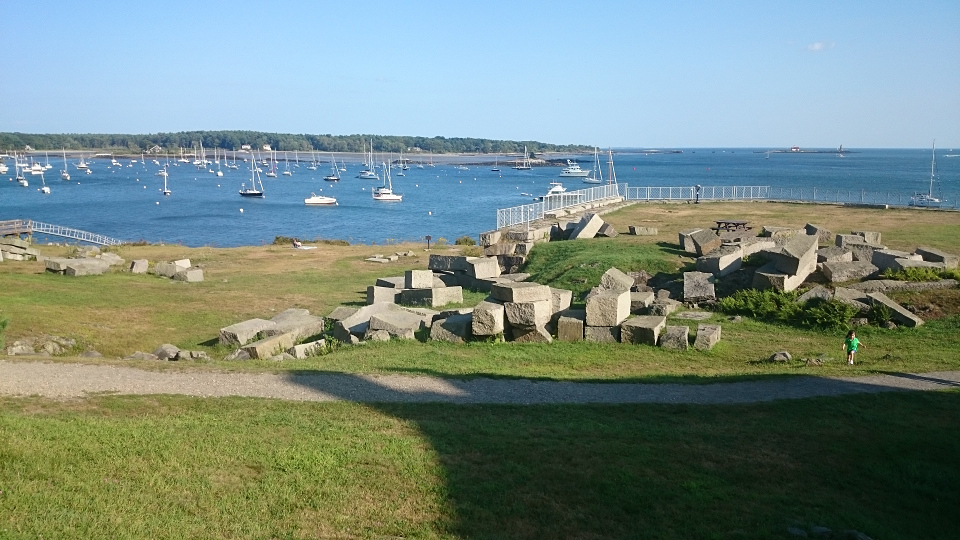 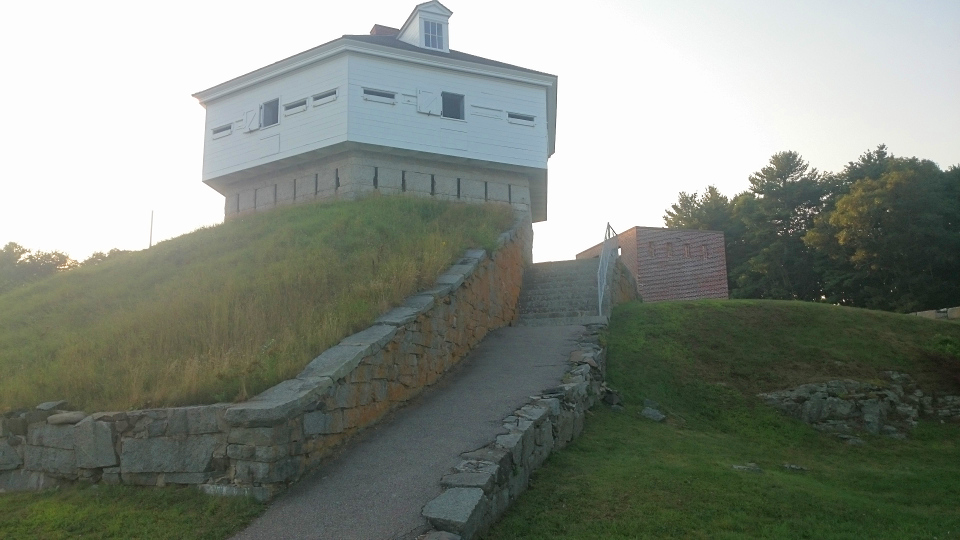 We alternately poked around for pictures, enjoyed a view together, or stopped and shot the breeze. We quite possibly scared a couple of dudes away when the subject turned to birth control and periods. I watched the boats in the water and thought about Murder, She Wrote and drank in the smell of the ocean. 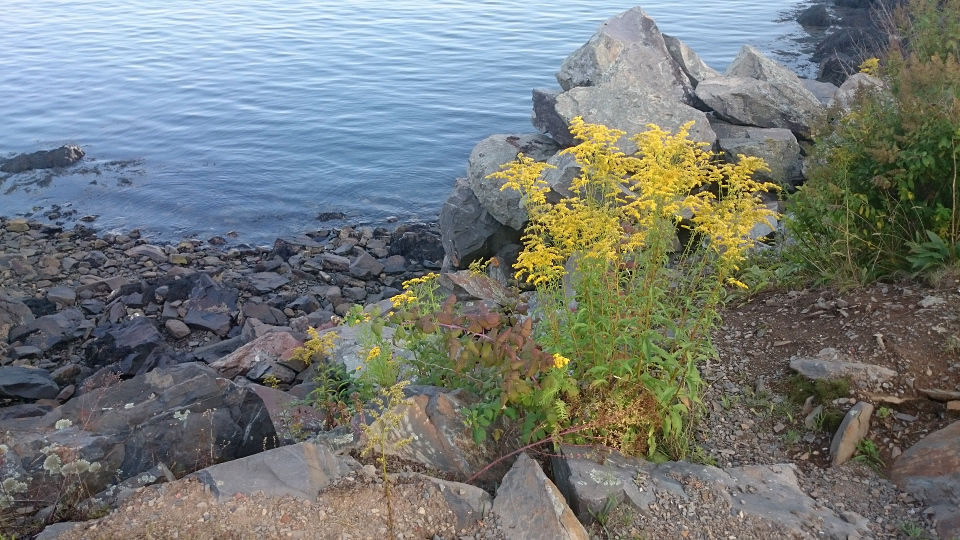 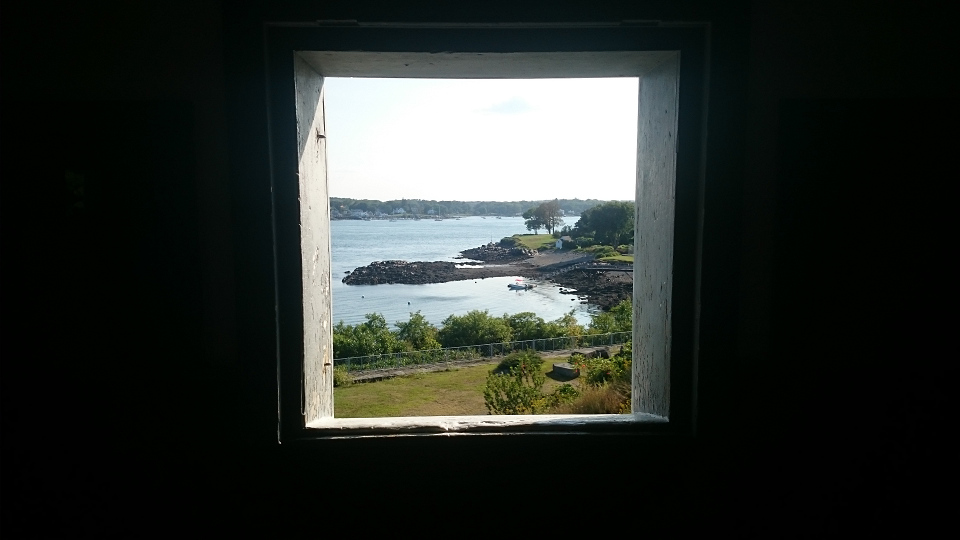 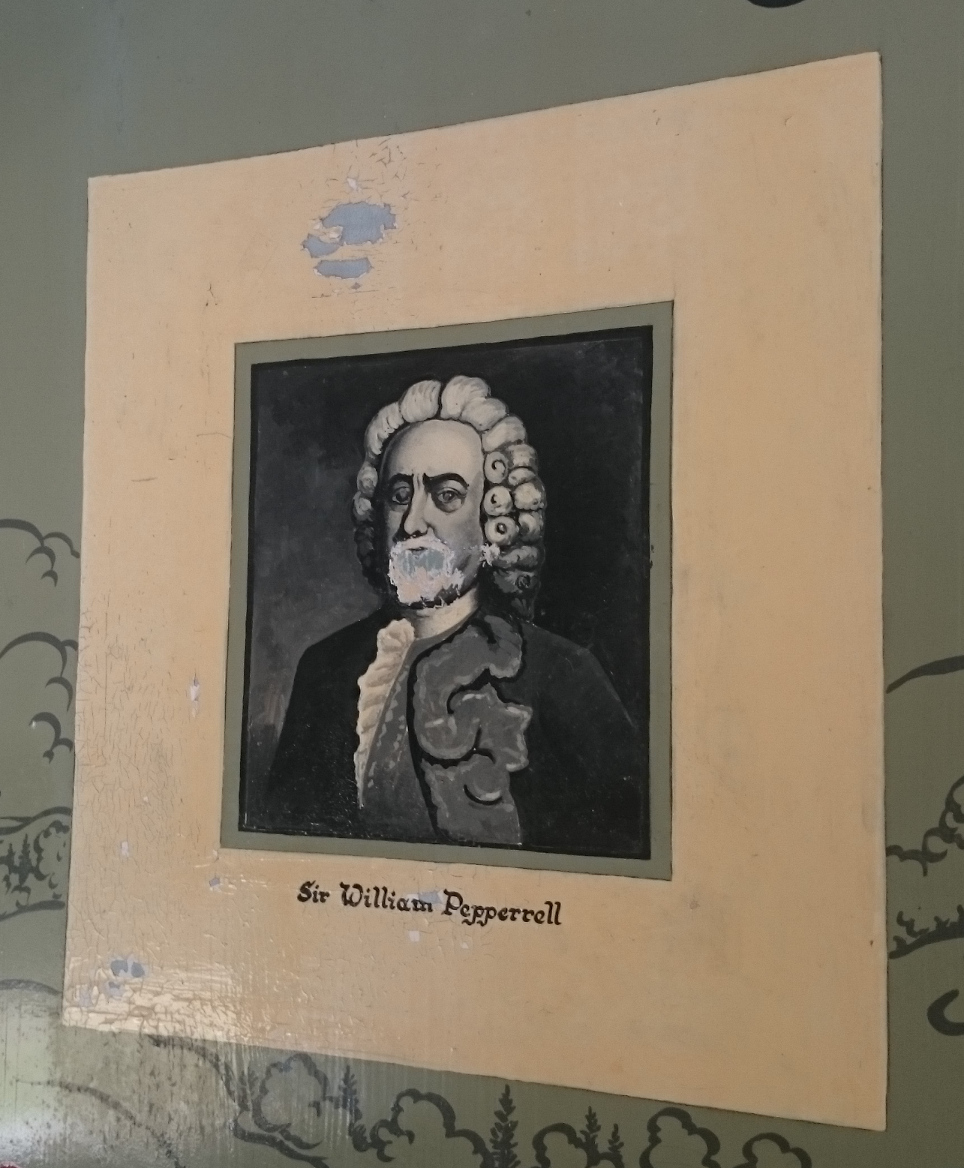 Somebody had it in for Sir William Pepperrell! 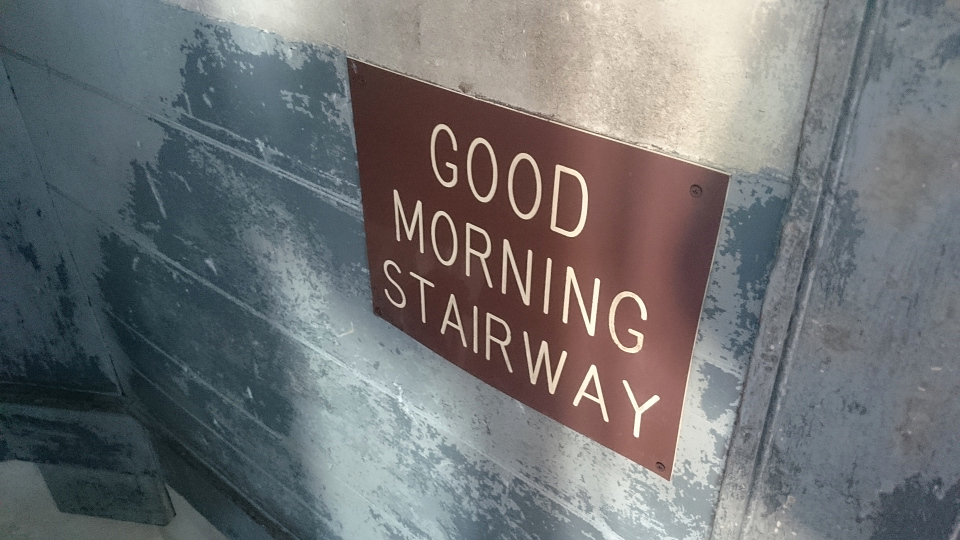 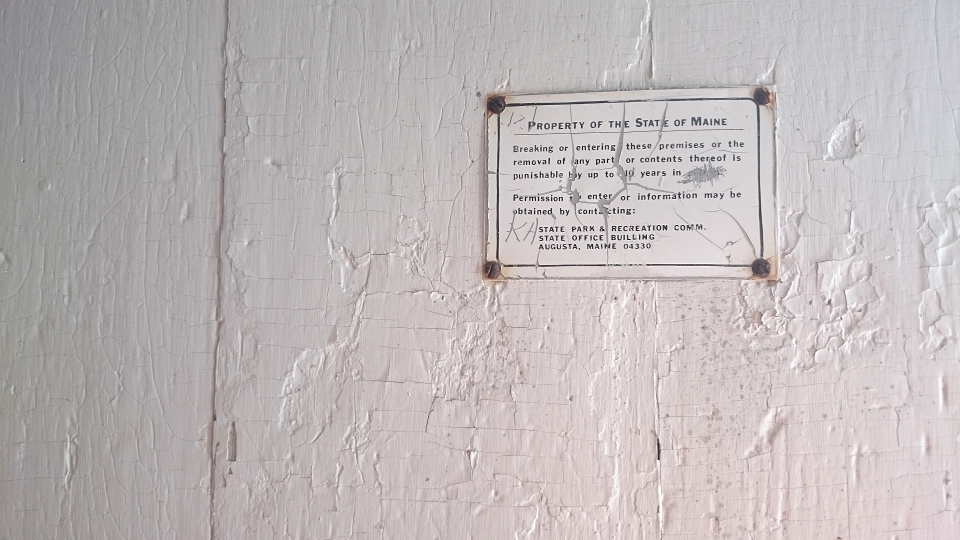 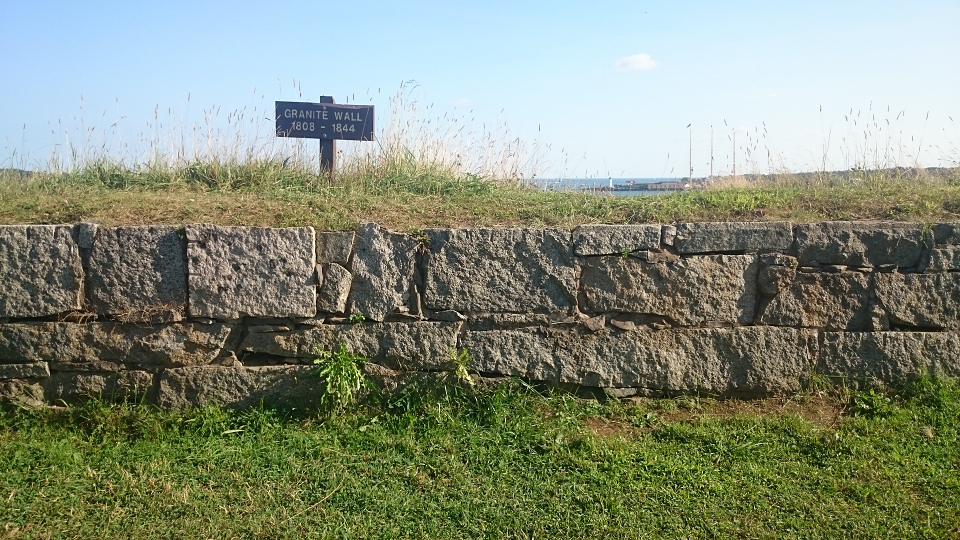 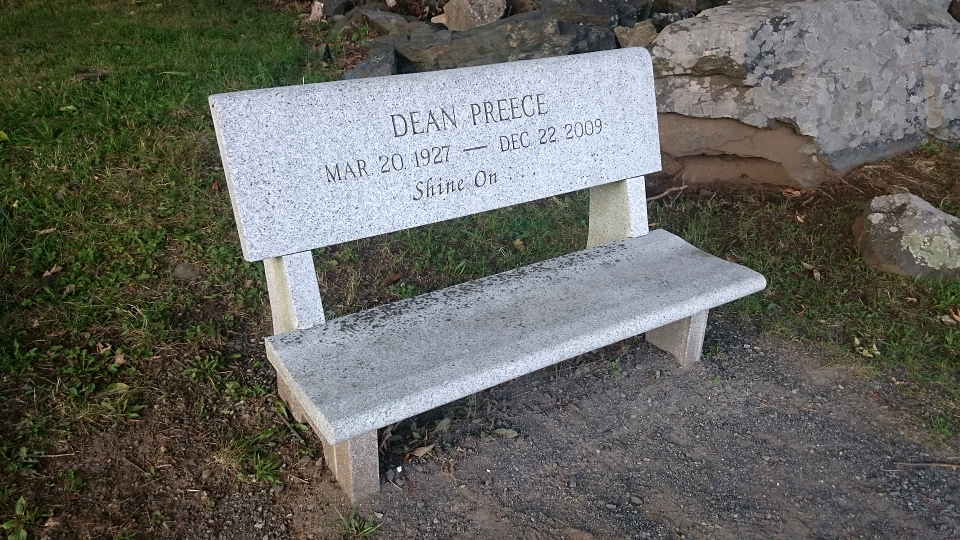 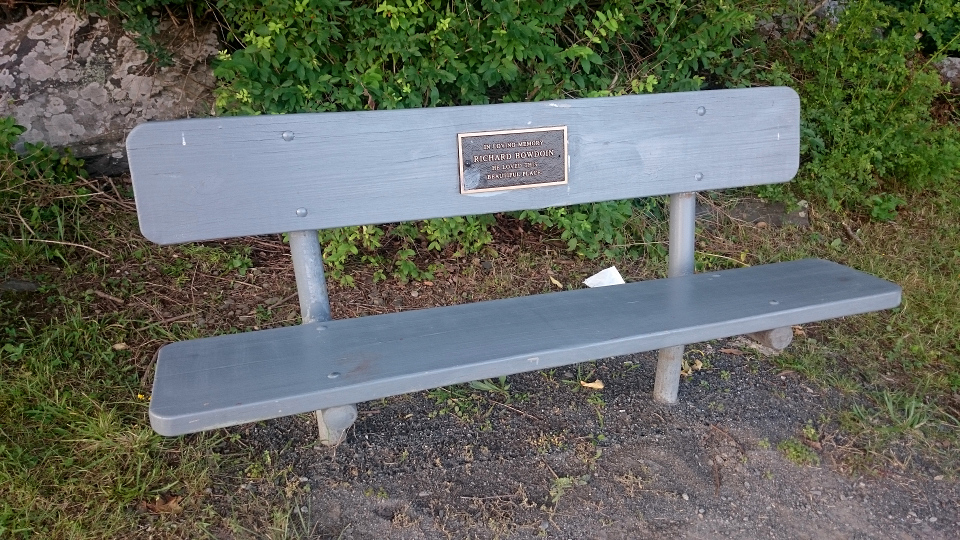 It’s a small and unremarkable park, but it does have a lovely view. I can understand why someone would be honored by a memorial bench here.

We decided to leave when the sun started to go down, since we still had a long drive back to the cabin. By the time we get home, Theophanes’s brother, girlfriend, and her nieces are already there. We knew that they were going to be staying overnight that night, so it wasn’t not much of a surprise; we just didn’t know what time they’d be arriving. For it being such a small cabin, though, it didn’t feel cramped with all of those people. Theophanes and I are beat (we did a lot of walking), but we hung around and chatted a little bit about our plans tomorrow: driving to Boston, Walden, Boda Borg. Neither Theophanes nor her family were really familiar with the concept of escape rooms, so I explained.

“I hope they let you out if you can’t solve the puzzle,” the girlfriend joked.

We needed an early start the next day, though, and we were seriously bushed from our adventures. We didn’t talk for long until we said our goodnights and collapsed into bed.