I got off to an early start, since I was taking the train out of Gothenburg (only twenty minutes or so, but still). I didn’t know how long my visit to Alingsås would take me, but I knew I wanted to visit Aniara Bokhandeln later the same day, so I’d booked a train for 10 am to assure me plenty of time for both. I got up early enough that my hair would be good and dry after my morning shower and leisurely hotel breakfast.

Alingsås was cute and charming, with a surprising amount to see and do for what seems to otherwise be a fairly small little town. I’d only dropped in because of the Karin Boye memorial, and in the end decided not to make a day trip of Alingsås this time around, but to come back another time and plan it better for the labyrinth, the large park, and I think some old castle or fortress?

I know Karin Boye best from Kallocain (which I originally read, like Aniara, in English translation in my Swedish literature course at Stockholms Universitet in undergrad) but she was prolific and talented and troubled. The ill health and death of her long-time partner (and possibly, Fascist encroachment in Greece?) finally unnerved her and she killed herself. A farmer found her early in the morning and a large boulder nearby was at some point declared her memorial.

Partner ill health and Fascist creep are deep, soul crushing worries I can relate to, so when I remembered that her memorial wasn’t far from Gothenburg I decided to go out there and sit a while. 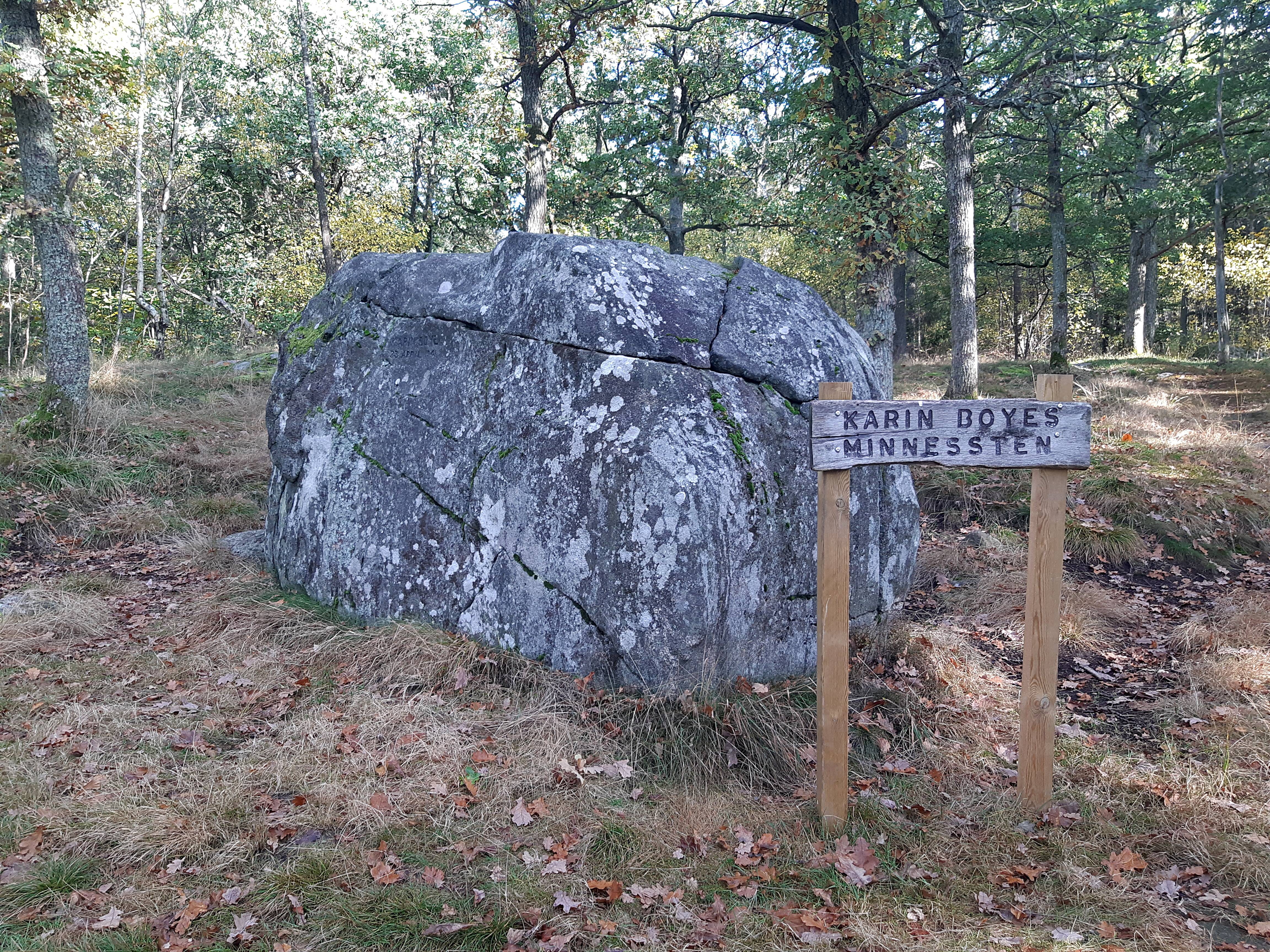 Always weird to come upon a place you’ve seen photos of before on Wikipedia. Something about the real and the image of the real, signs and signifiers, etc. (Oh, hey, and something like nine months after this trip I finally read Baudrillard’s Simulacra and Simulation!) Nor did it help that you essentially have to cut through the Swedish version of suburbia until suddenly you’re faced with what’s essentially a small cliff. There isn’t any threshold, either, from the quotidian to the transcendent, nothing to ease you into the place of someone’s death. Rather, as soon as you scramble up that cliff the boulder is right there. 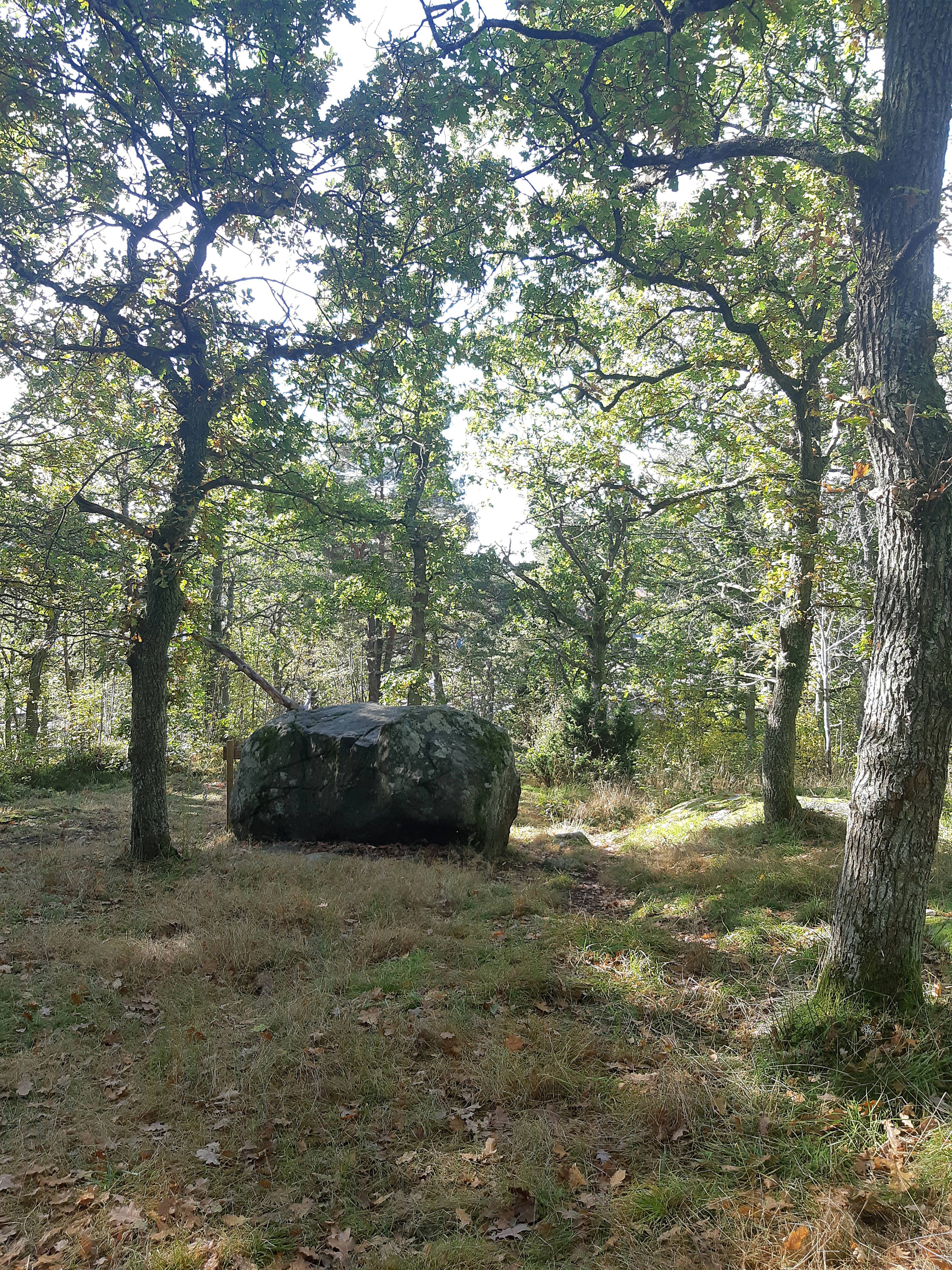 The view from where I did most of my sitting and thinking. I scratched out a little poem while I sat there.

A small group of older women out on a walk passed in one direction first, then later, in the other direction; a woman my age, whose little dog didn’t take kindly to my presence.

After maybe an hour or so, I descended the cliff again and did a little flaneuring in the vague direction of the train station, taking in the architecture and the art installations of Alingsås (light shows, statuary).

Back in Gothenburg, Aniara Bokhandeln was empty when I turned up, so the proprietor turned all of her friendly storeowner attention on me in a way I should be used to, but for whatever reason am not. It’s at least not as thoroughgoing as in the US, so she didn’t hound me as much as someone in a similar position would have in the states. 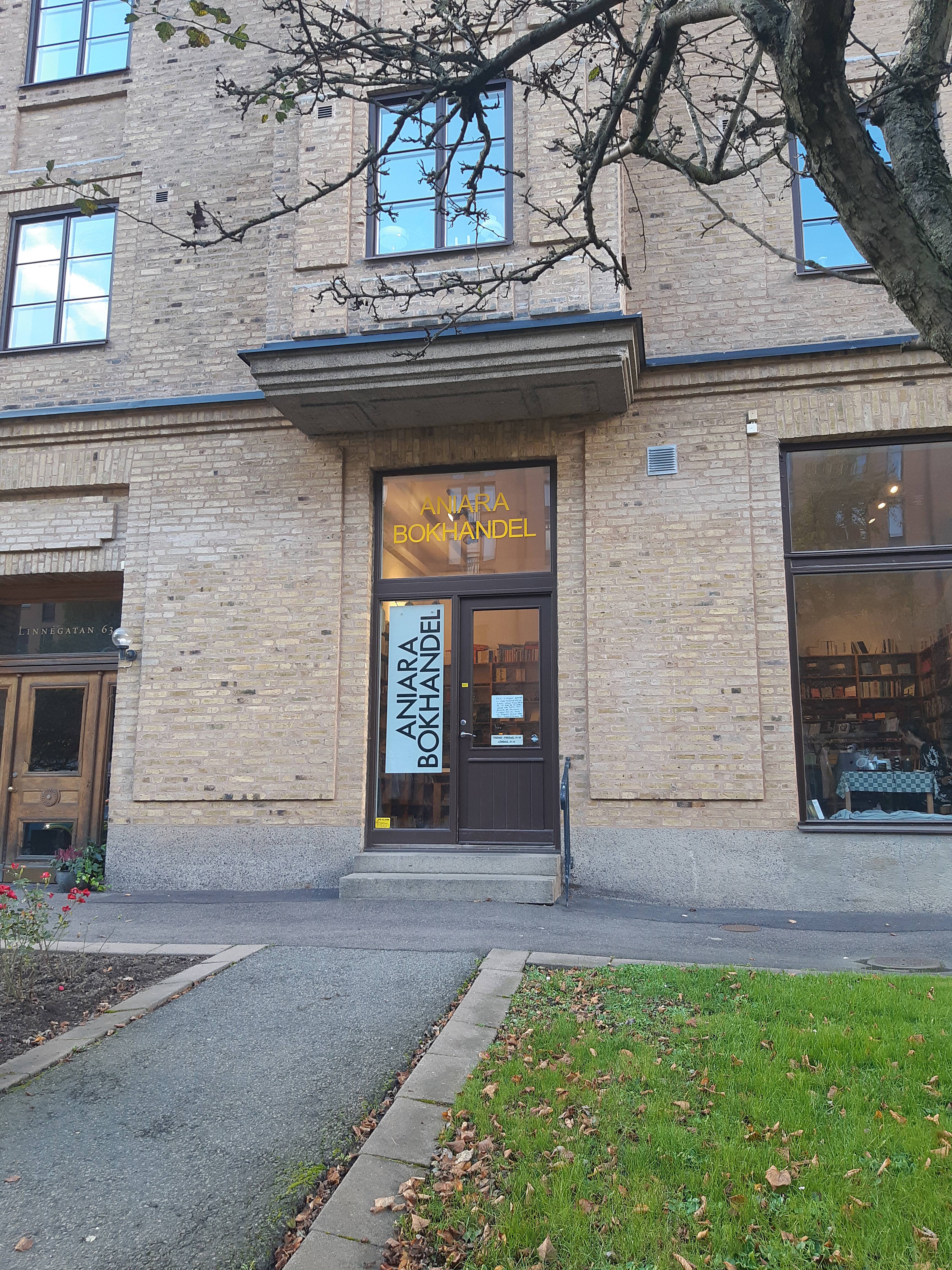 The selection, I joked in a WhatsApp message to a friend, was full of material as erudite and impenetrable as its literary namesake. Politics, history, philosophy, and all manner of dense academic texts lined the shelves. Not so much airport novels or popular fiction, which resided in two small sets of shelves in the back, in a recess up two or three stairs behind the main floor of the shop.

I struck gold there, however. I found a copy of the much-lauded Är svensken människa? Gemenskap och oberoende i det moderna Sverige (a book-length investigation of how individualism and collectivism play out in modern Sweden) and the much more obscure but the possibly way more buckwild Uncle Sam’s Cabin (a “we Swedes have traveled around the US and are now reporting back to you on what we discovered” type travelogue from the early 60s).

Books and some postcards in hand, I went off in search of dinner, which ended up being my second langos of the trip. It took them a little while to prepare, since they’d run out of feta, but I was grateful for the long opportunity to sit and read, and they offered me a free drink to make up for the wait, so it all worked out in the end. The only other customers while I was there was a couple, husband Swedish and wife of some kind of central European extraction, and the wife had no qualms whatsoever about informing the owners that her lango hadn’t been prepared quite right, and so began a long conversation about the best way to fry them.

Full of good food and warm from head to toe, I set out for my hotel room on foot instead of by tram. I hadn’t paid for a single tram ride and wasn’t about to start now, plus I wanted to know how to get from the Second Långgatan neighborhood to my hotel on foot, without having to rely so heavily on Google maps. It was a good half hour to forty-five minutes of a walk or so, but the weather was fine and I welcomed the exercise. I stopped off at a few secondhand stores to see if they had any small rabbit figurines (an inside joke with my sambo), but no dice. Otherwise I just followed the tram line as best I remembered and lo and behold it wasn’t that complicated at all. Just a bit long.

I left the books and the postcards in my room, grabbed my fully charged powerbank and cable, and took the tram back the Second Långgatan quarter. I’d thought out loud via WhatsApp at Irish Coworker about whether I felt up to crashing bar trivia in Swedish as a team of one.

“I got a mate there, Fabian. Look him up, he loves a good pub quiz” and sent me a link to Fabian’s Facebook profile.

“Nja, drinking with one of your friends? I’ll wake up in a gutter somewhere.”

“Kelly’s then! You gotta go to Kelly’s.”

So Kelly’s it was, with a lot of beer and lot of reading. I contemplated striking up a conversation with a guy I saw at the end of the bar who never once put his phone away but seemed on very friendly terms with the bartenders and a couple of other regulars at the bar, but never got around to it and so instead I more or less finished reading Une morte très douce. I stayed until closing, stonefacedly ignored the couple cab drivers making a bid for my business, and made it back to the hotel room at around 2 am just fine.