I say “19.5” because with a flight out of the country in the evening, this wasn’t exactly a whole day in Boston. I spent a smidge over 24 hours in town, so should that count as two days?

I woke up a little before Diana’s alarm and futzed around a bit on my phone. She showered and got ready for work, and I got dressed in my lazy bum traveling clothes and we were off.

My morning wasn’t too eventful. I dumped my travel bag at the station, and then spent the rest of the time I had until burritos with Diana and Walter writing in Boston Common and then wandering through the botanical gardens. 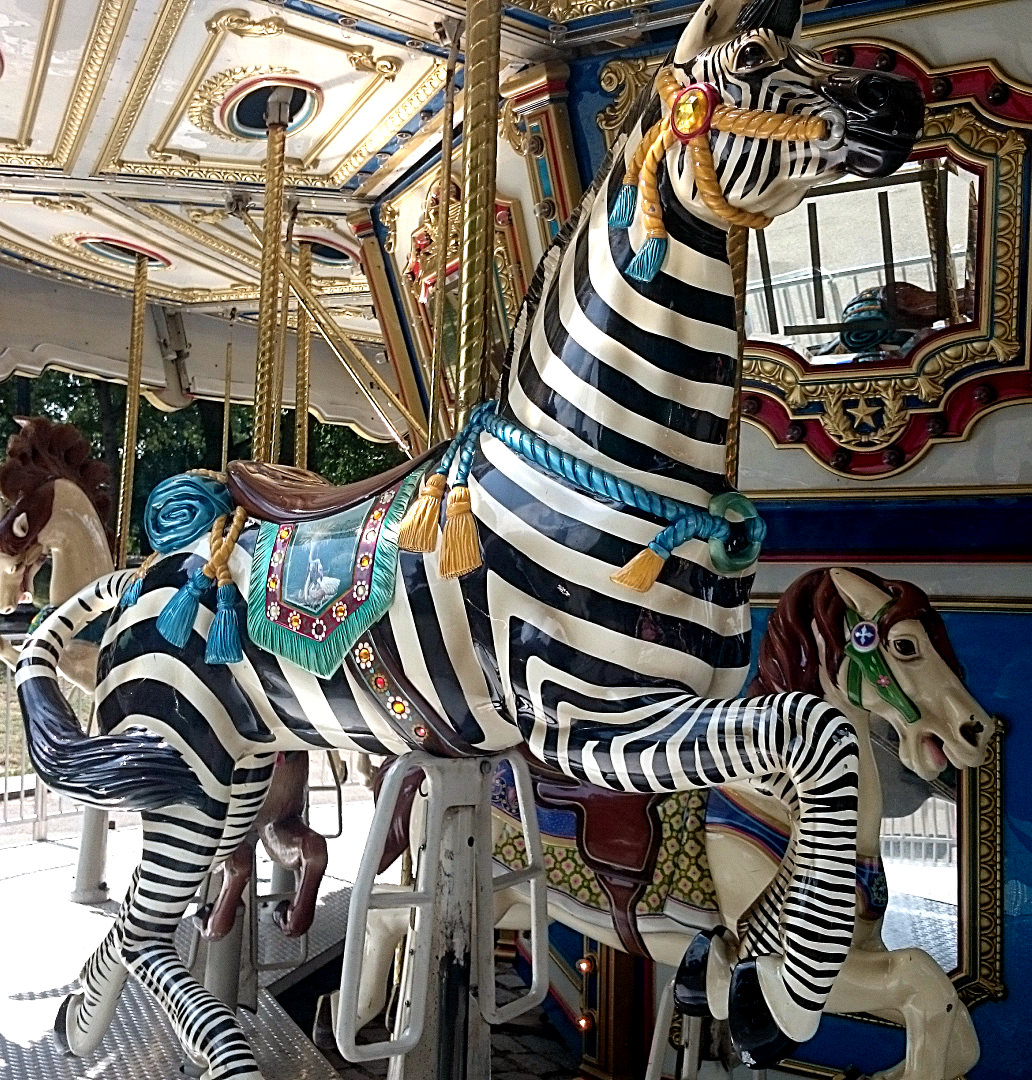 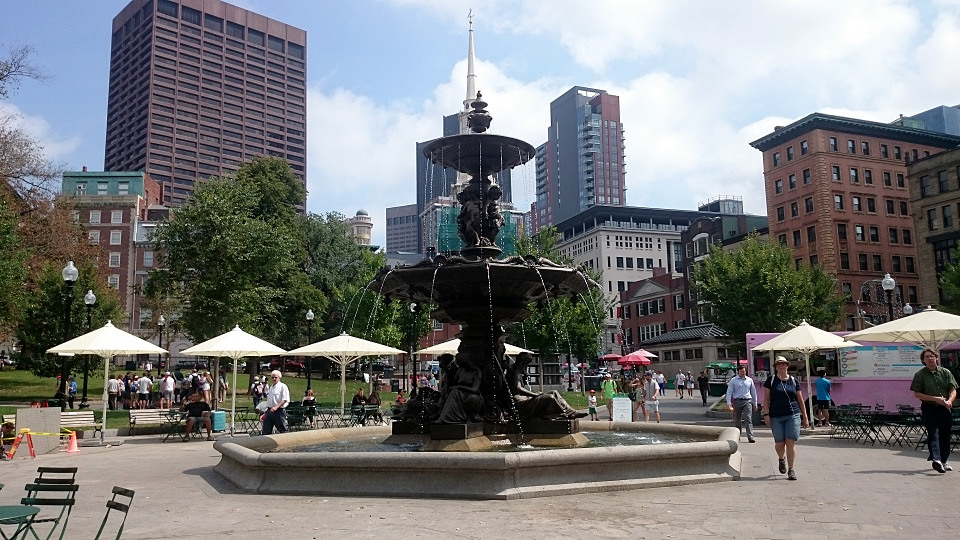 It was SO. HOT. that day and I very much wanted to jump in any and every body of water I saw. Fountains, duck pond, the little kid wading pool…all of them.

All of this was right after Nazi demonstrations and protests and tiki torches and all of that good stuff. (I picked a helluva time to be back in the US!) It was a topic of discussion when we were at dinner in Old Orchard Beach. Seth (Walter’s boyfriend) was amazed that Nazis would even dare to turn up and show their faces in Boston, of all places—the city is so progressive and liberal and etc.

I shook my head. “Nah man, what I’ve heard from non-white friends of mine who live there…it’s a different experience.”

There were leftovers of protests and rumbles on the Common.

I finished my writing and my photo-taking and wandered in the direction of the public gardens, because I guess that’s what I do on vacations now? 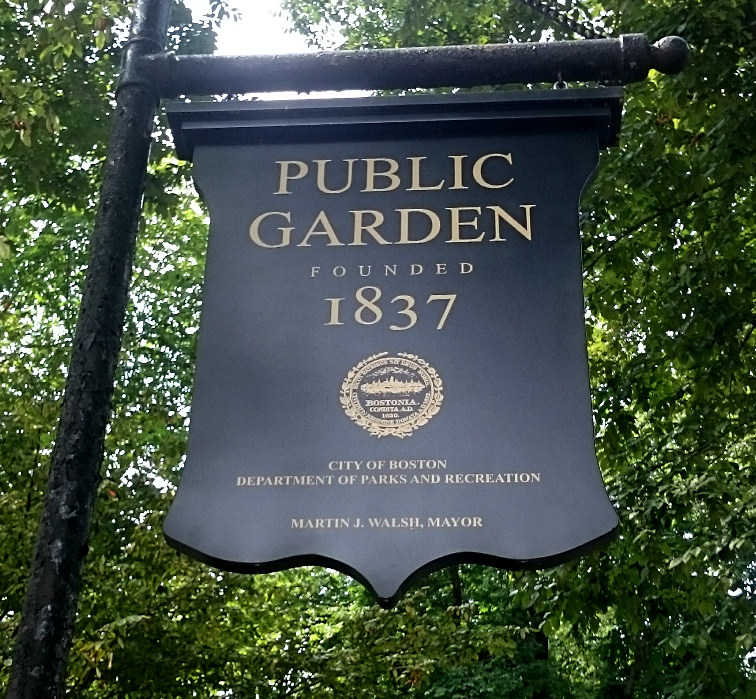 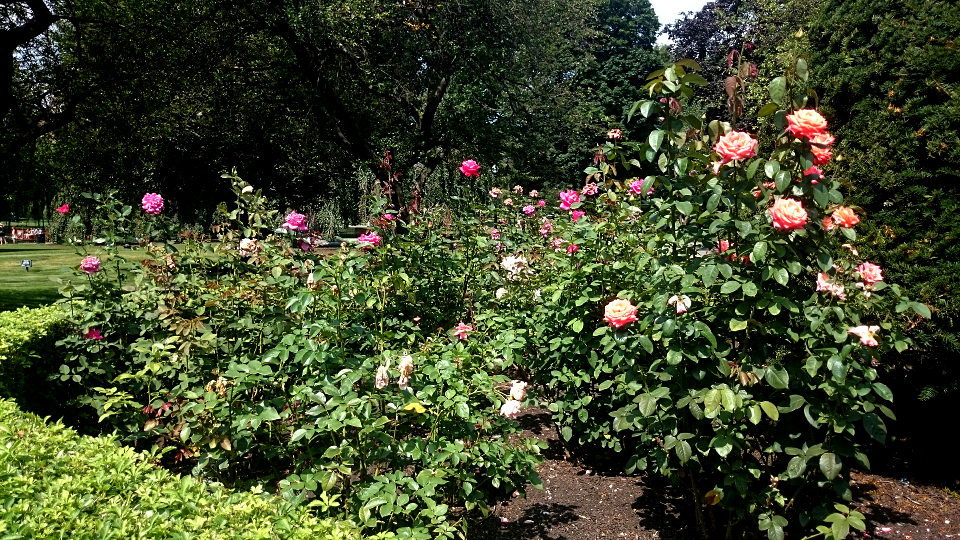 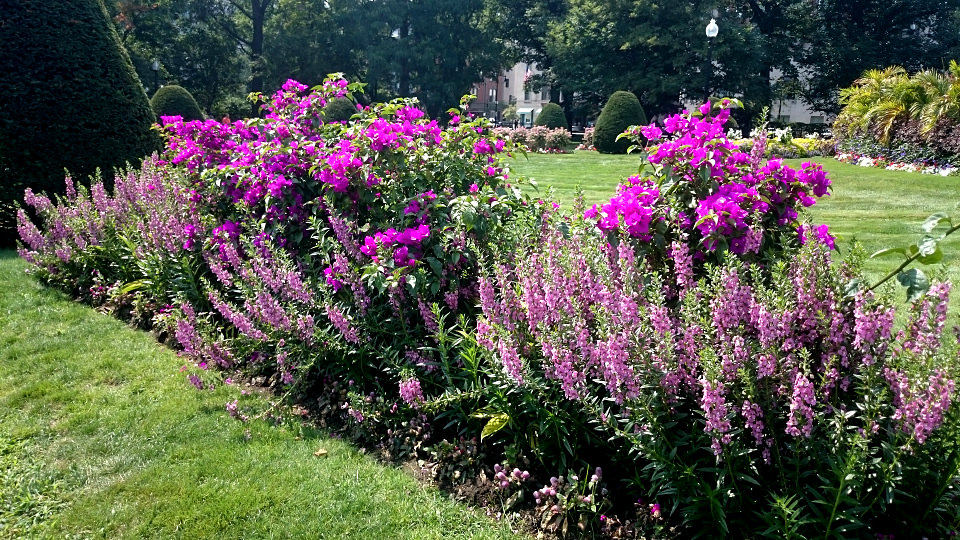 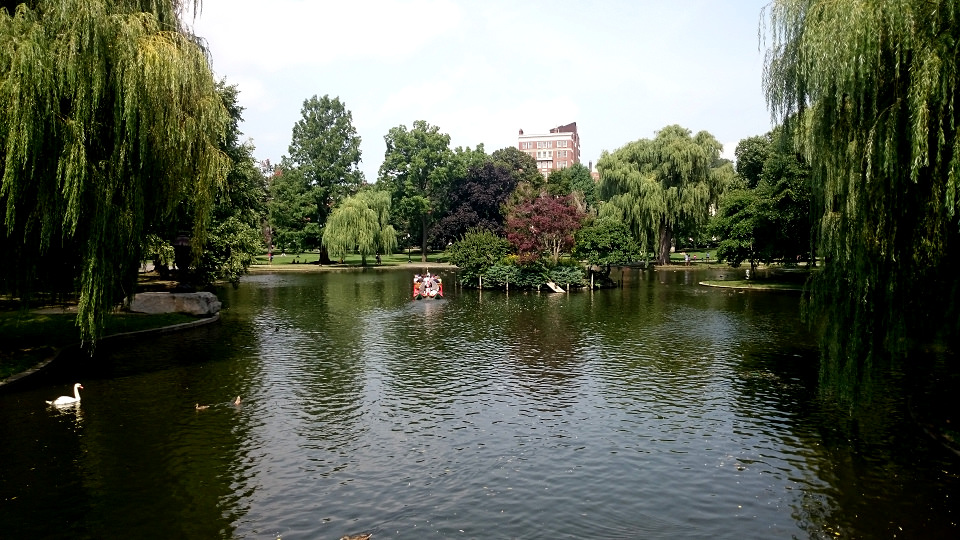 There were a couple buskers out in the park. An elderly Asian man playing what I think was an erhu, and then a hip young white dude with a tenor sax: “Careless Whispers,” “What A Wonderful World,” etc. 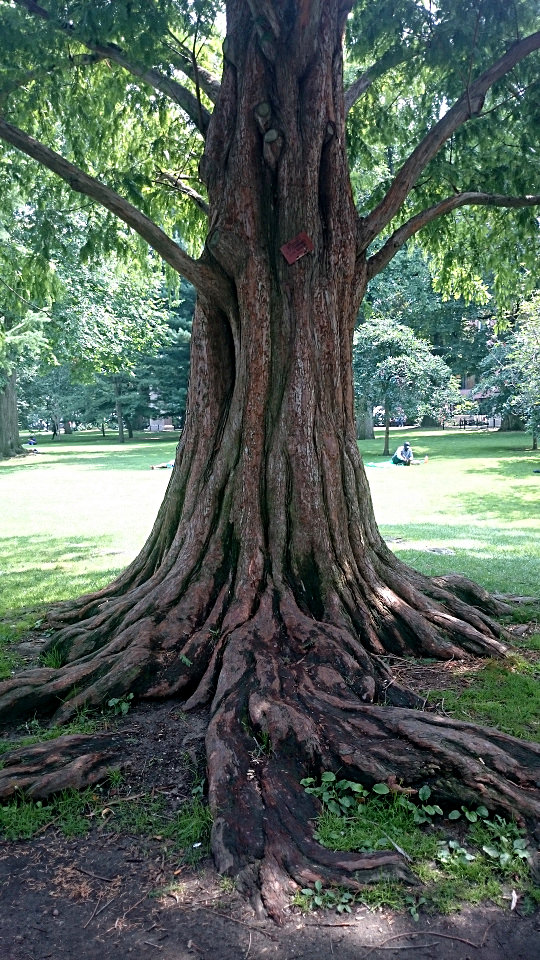 We said our goodbyes and I walked around the city a bit, despite it being SO. HOT., because I figured if I’m going to say that I visited Boston, I should have at least seen some of it? The other times I’ve been in Boston, I’ve been sequestered away indoors at anime conventions so I wanted to say that I had actually been in Boston. Or whatever. 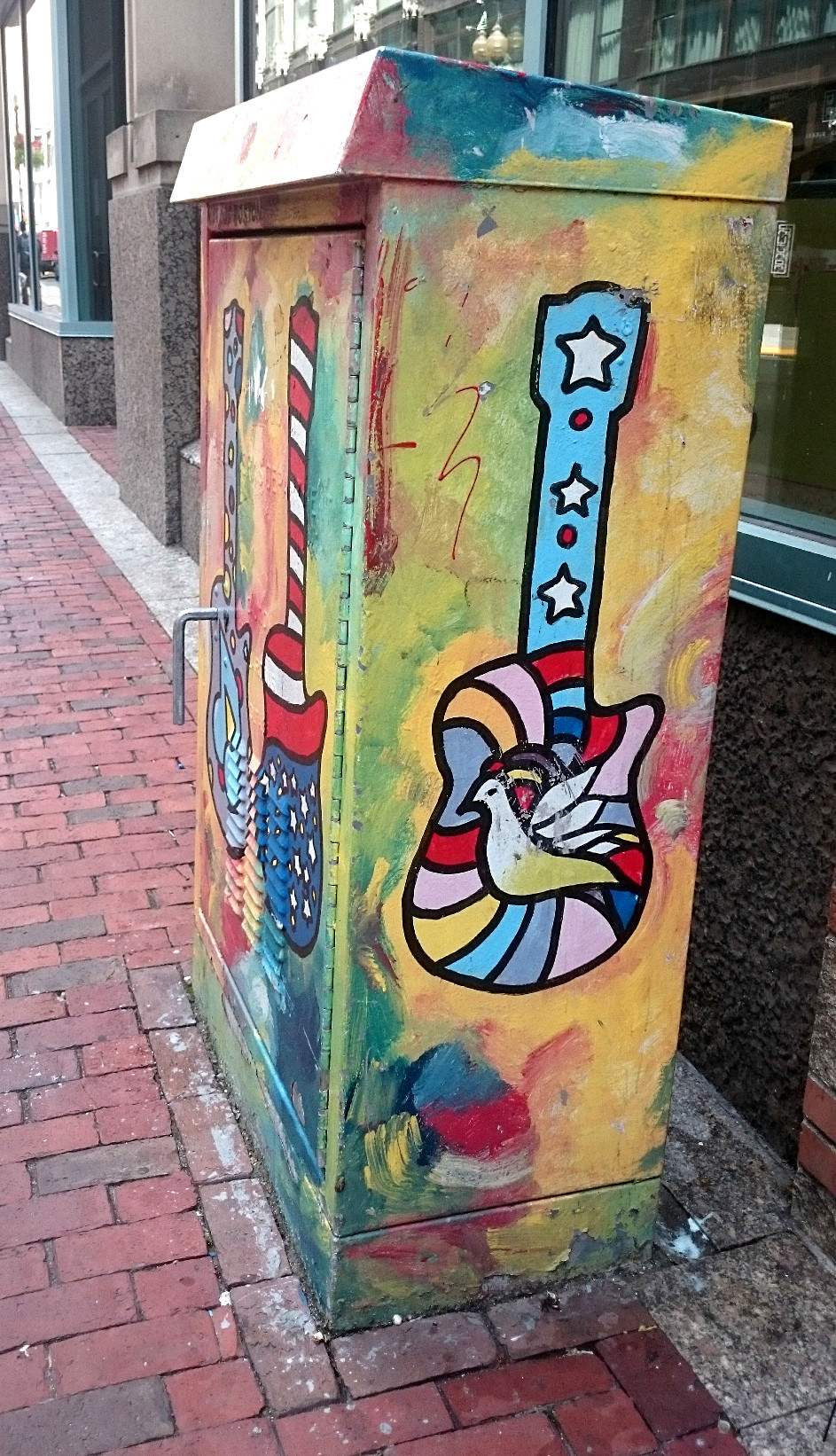 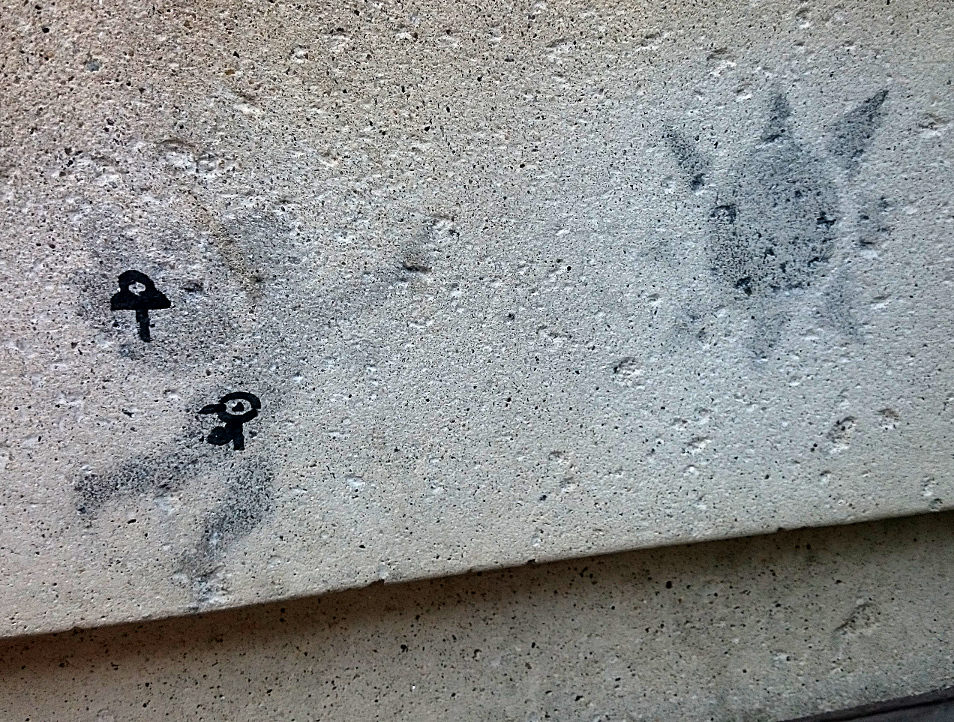 I was due to meet another friend, Amy, at a marketplace in the afternoon, though I turned up quite a bit early so I could browse around a bit and enjoy the air conditioning. I bought some yarn for one of my knitter friends back home, and picked up a business card from American Stonecraft. I love rocks, and I love New England, and this is exactly the kind of thing that my mother-in-law loves, so I’ll probably buy something online for her birthday or Christmas present. (Probably a coaster or two.) 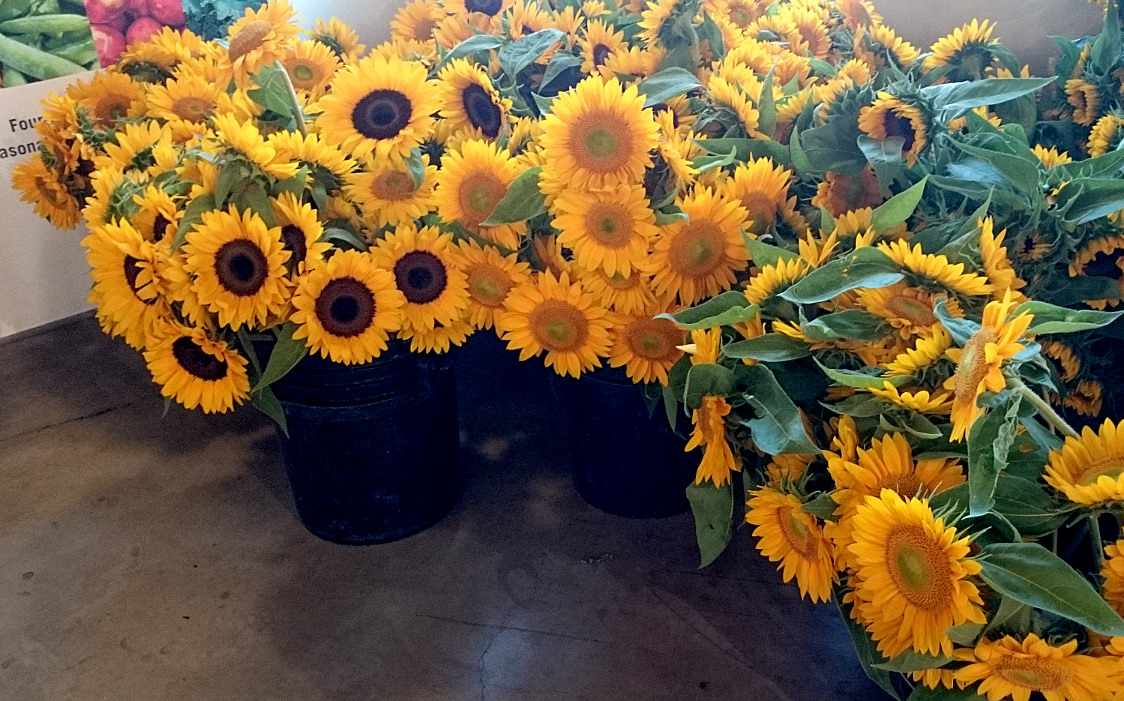 Once in a green time a flower
Oh, fell in love with the sun.
The passion lasted for an hour
And then she wilted from her loved one.

Amy did the very smart thing and brought GAMES because two people with low-key (and sometimes not so low-key) social anxiety need all the help interacting they can get! Or at least I do, even if meeting Internet friends is always less fraught than I expect it because it’s not like I don’t know them at all or anything. Although I was still a bit of a traveling mess—piecey hair, clothes chosen for comfort rather than fashion, indescribably sweaty—so props to and everyone else that day for spending time with my unattractive self!

After we got chocolate and chatted a bit and I saw some Andy pictures I hadn’t before (ATTACK OF THE FIFTY-FOOT TODDLER!), we played a couple rounds of Hanabi, which I sucked at but enjoyed nonetheless and have since added to our small roster of games (Munchkin, Dixit, Magic: The Gathering).

After that it was off to the station to pick up my bag, which I had to pay some extra for by all of ten? fifteen? minutes. Ugh. Nonetheless, it was worth the convenience. I had a hell of a time finding the bus to Logan, and then the check-in line for Norwegian was FOREVER LONG. It wasn’t as stressful as it would be if it were my flight going in—I had no pressing plans back in Sweden that would suffer if I got bumped back a few hours or even a day—but it still made me anxious. The family behind me, on the other hand, realized they had the wrong passports, and it was a rush of phonecalls and sending out teenage son to meet dad and etc. to fix it. So someone was having an even more stressful wait than I was!

We boarded on time, though, and everything went smoothly. My layover in Copenhagen was slightly shorter this time around, so I didn’t try to do any more exploring. I just hung out at one of the terminals, charging my phone and letting my boyfriend know that I would be at Arlanda in a couple of hours.