“Wouldn’t it be funny if we saw Walter and Seth?” L asked as we tooled around, looking for a parking spot. I don’t know if he said that because he’d already seen the two lanky figures, one blonde and one brunette, ahead of us or if he was just idly wondering, but there they were.

“That’s totally them,” I said, and waved my arms as we drove past. Maybe L honked? Somehow we caught their attention and they wave back. L found a place to park and we spilled out to say hello. Bucky with her family (baby Luca, husband Joe) and Becca with her boyfriend were also wandering around, so we stood and caught up in the middle of the sidewalk.

The last time I was in Old Orchard Beach was in 2008, at the very beginning of June, or maybe the end of May. Tourist season hadn’t started yet and everything was largely abandoned. It felt like we had the whole town to ourselves. I couldn’t imagine it being any kind of major travel destination.

In the short drive around with L, I could see there are a lot more people than the last time I was here. Parking along the street was pretty crowded (maybe it was wedding guests?) and a steady trickle of cars passed us by as we talked on the sidewalk. We didn’t see anything of the bride (Shufang) beforehand, but we caught the groom, Aaron, and the groomsmen (and groomswoman) to say hello and introduce ourselves.

The ceremony was brief and bilingual, with Aaron’s dad reading some bits in Chinese and Shufang’s father reading some bits in English, and mercifully free of tepid Bible verses. (“If I have to hear ‘love is patient, love is kind…’ at one more wedding,” L had grumbled on the way up. Saved!) They exchanged the rings and everything and, for the third time, they were married (they’d already had two weddings in China: one more or less ceremonial and one legal). In my head I made a joke about how does this mean they need to get divorced three times if they want it to stick, but I thought better of it and didn’t say anything. Everyone left the venue to the tune of “Can’t Help Falling in Love” as rendered by a dude with a guitar, and we had a few minutes to kill before the lunchtime reception at Joseph’s By the Sea. L wanted to head to the beach, and I did too, so after we stopped for some coffee with Becca and her boyfriend, we wandered towards the shore.

I hadn’t been to a beach in ages, so it felt really good to take off my shoes and get some sand between my toes. L and I both went right down to the water and got our feet wet. He was wearing long dress pants, so it didn’t quite work out for him like it did for me in my knee-length dress. 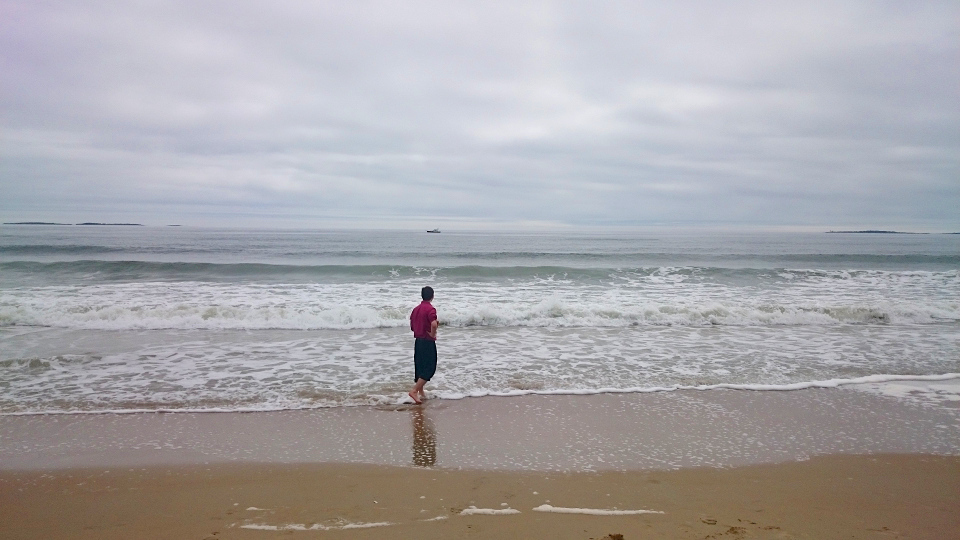 We walked back to the reception, L soaked almost all the way up to his knees.

The reception wass at a mixed indoor-outdoor space, a restaurant that had a porch and then patio leading down to a lawn overlooking the beach. (Hence “Joseph’s by the Sea,” I guess.) L and I milled around and ate at a table on the lawn, accidentally separating ourselves from the rest of the Hamilton crew and spending the lunch with the bride and some of her friends instead, chatting about public health and economics.

Then it was time for wedding party photos. They took some photos of the bridal party on the little wooden porch, and during the photos of just Shufang and Aaron, a parasailer drifted by, in a huge skull-and-crossbones parachute. I immediately remembered Aaron as he was in college, plaid pants and a Misfits t-shirt; there couldn’t have been anything more appropriate to suddenly fly over his wedding. I’m sure the photographer tried to keep that out of the shot, though, which is too bad.

We joined everyone else back on the patio after the toasts, and the cake was cut and the dancing began. There were a few short family dances to Aselin Debison’s version of “Over the Rainbow / What a Wonderful World” and then everything really kicked off with “Ballroom Blitz.” No one danced at first, except Aaron and Shufang. I was a few drinks in by now and fidgeting in my seat. After maybe thirty seconds I couldn’t stand it anymore and rushed the dance floor to keep Aaron company. He grinned.

“I always want them to play this at wedding receptions and they never do,” he said-shouted over the music. “I told the DJ I wanted this song at least. I don’t care about anything else.”

All the Hamilton people drifted out to the lawn for a breather. The photographer wanted to get some photos (“Great, when everyone’s all sweaty from dancing?” I complained mostly to myself) and so we crammed into assorted group shots in between conversations. All that taken care of, L decided it was time to drive back to Albany soon (eight hours in a car for four hours at a wedding? I guess…) and so he and Walter and I ducked out so I could drop my bag in Walter’s car to make sure it didn’t end up back in Albany.

When Walter and I got back to the restaurant, it was clear that the rest of the reception was beginning to wind down. The restaurant needed to start getting ready for dinner, so by 4 p.m. things had more or less wrapped up. We returned to the motel and I hopped into a closet to change out of my dress and into a tank top and bike shorts. My thighs were on FIRE.

I wanted to know what we were doing next so I could give Typhani a heads up, and eventually we decided on dinner. Things took a little negotiating and research, since both Becky and Becca have Celiac’s and thus restaurants need to be reliably gluten-free. After all of the appropriate preparations are made–changing clothes, setting up baby playpens, using the bathroom–we left. We had a little trouble finding the restaurant. It was peak tourist hour along the boardwalk, and we were swamped with swarms of people and families, loud music, signs announcing beer specials, and kiosks hawking typical beach tourist gear. I had sudden flashbacks to the boardwalk shops at Rehoboth Beach, where my family vacationed every summer for years.

After some finangling and Google maps and asking a traffic crossing guard, we managed to figure out where we were and how to get to the beach shack/diner-y place Becca we had settled on.  Typhani had a heck of a time trying to find parking, but she managed to squeak in right after we order. The food was filling, though not particularly memorable, and we talked and joked away for a couple of hours.

There were plans to go to some bar or other after dinner and hang out with Aaron and his friends. But first I had to go back to the motel and get my bag into Typhani’s car. Becky was there before us, getting Luca settled and still coming down off whatever fight she’d had with her husband before dinner. I gave her a good, solid hug and then Typhani and I were off to the afterparty.

Oh good Lord, it was TOO MUCH. Now my long day was starting to hit me, also paired with Typhani and what I knew about her own sensibilities. The loud sports/dance bar with fog machine and lasers? Not her scene. And it wasn’t feeling like much of mine, either. But I said hello to  Aaron and introduced him to Typhani and congratulated him, and he let us know that there was a breakfast tomorrow morning for everyone courtesy one of his aunts. We hugged goodnight, and Typhani and I were officially on our way to the camp in Pittsfield. It wasn’t as long a round-trip drive to make as the drive from Albany to Old Orchard Beach, but it wasn’t a short one.

“The camp” is really a prefab little cabin, but it’s surprisingly well-designed and roomy-feeling (and solid-feeling) for being what it is. The property belonged to Typhani’s grandmother and used to house what she described as a crazy, rambling shotgun shack that kept having additions added to it, with light switches outside of rooms and wobbly stairs that went up too high and then had to descend down again. But it had burned down a while back and Typhani’s mother used the insurance money to get the cabin. I dumped my bag in one of the two bedrooms and fished out my gifts: some Söderte and my copy of Journal of a Solitude.

“I think you’ll really like it,” I explained as I handed it over. “It’s about a woman who just spends a year living out in the country, just writing.”

Typhani is big into the homesteading and farming movement, and by her own admission she was on the verge of getting the farm she had set up with her ex to finally turn a profit when he dumped her. The plan now is set her nose to the grindstone and get her own homestead and community farm up and running herself, but these things take time, especially considering her invisible health struggles. In the meanwhile, I thought May Sarton could keep her company.

Typhani also has a gift for me: a little clay owl magnet that she made: 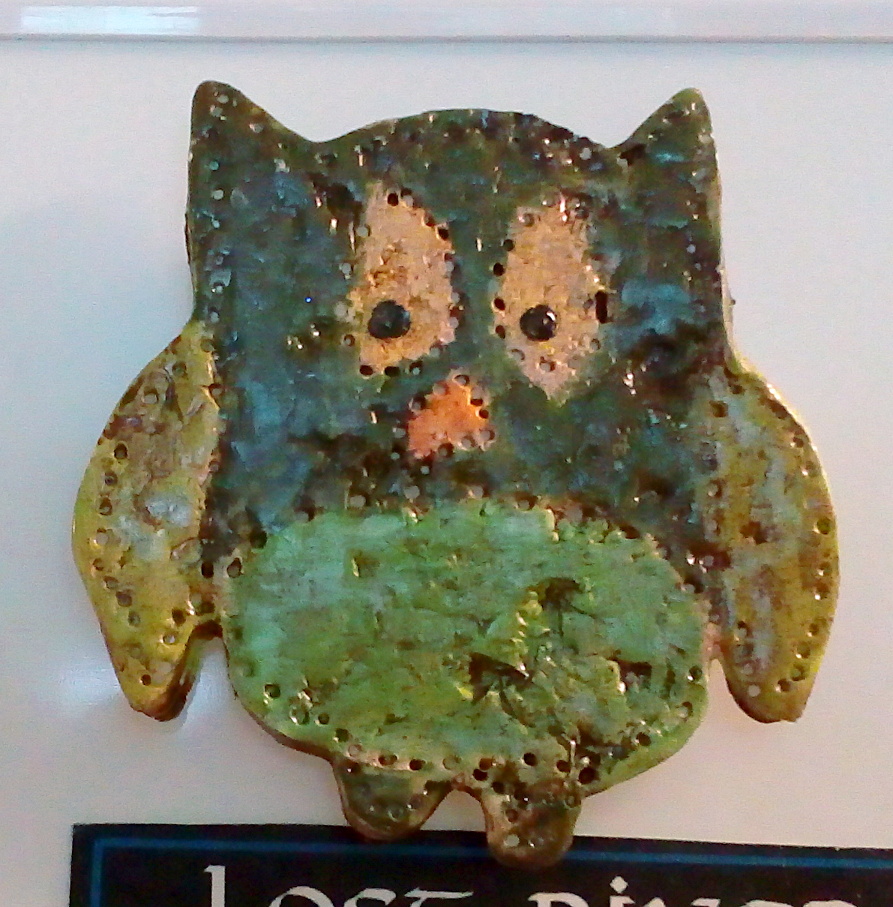 We stood around and chatted for a bit. It was close to midnight by now and I was feeling a little delirious from exhaustion and dancing. It felt like I’d been up for days. Exhaustion and dancing also meant I was sweaty and gross, so I hopped in the shower and heat blasted all of the grime right off of me. Nothing like hygiene to make you feel human again.

“How many bucks do I feel like?” I announced when I come out of the bathroom. “A million.”

With that, I bid my hostess good night and collapse onto the brand-new bed.