I took the bus from Best Chemist Friend’s back home and spent most of the day packing up books and running errands for Swedish friends (by way of being a taco sauce mule).

This day was a Wednesday, a day I usually spent at bar trivia with friends. But since it was probably canceled because of Musikfest, and because ex romantic entanglements made it potentially weird anyway, I stayed at home and went swimming with Best Chemist Friend instead, discussing outliving our heroes and becoming grimey hippies. Afterwards my mom took us out to dinner, since this was the first she had seen Best Chemist Friend (essentially an adopted daughter for her) in years.

There are so many new places to eat that didn’t exist when I was growing up here, or even four years ago. The restaurant Mom took us to was one had existed when I grew up, but was for sale when I left. Now it’s a restaurant again, with new owners and a new name but much of the same atmosphere (from what I can vaguely remember). I finally had my first Yuengling of the trip, and now I was really home.

My goal for the next day was to drop off a few boxes of books at the library, and then hit up  Musikfest with a friend and former co-worker. My go-to library for book cast-offs, the Quakertown branch of the Bucks County library system, wasn’t taking donations at the time, so I had to go on a little adventure to find a home for my books.

I thought, for a moment, of sending them to the huge thrift store in Hellertown, but I like to give books to “book places” before “generic stuff-unloading places.” I decided to try the Riegelsville library next, since it was closest to home and near a new cafe that’s supposed to be pretty good.

When my brother and I were still really small, my mom took us on a drive to try to find this same library. It’s easy to see from the main road, but then actually getting there isn’t exactly intuitive. (And, of course, she was doing this in the age before GPS and smartphones.) She drove around for a while before giving up, and from that point on she just patronized bookstores with us instead of the local library. I don’t remember this at all, though; it’s just a story she told me once when we were driving through Riegelsville for some reason or another.

I thought about that story while I drove around the back roads of Riegelsville, looking for the same library, wondering if I’m following the same random no-outlet residential streets Mom did when she was trying to do exactly what I was doing. I had been to this library twice before, for library sales, but years ago. My memory was dim, and this time there weren’t any helpful signs up or large crowds of people and activities going on. I pulled into the only non-church, non-residential parking lot around and then realized this was actually the library—it shares space with the all-purpose Riegelsville Municipal Building. 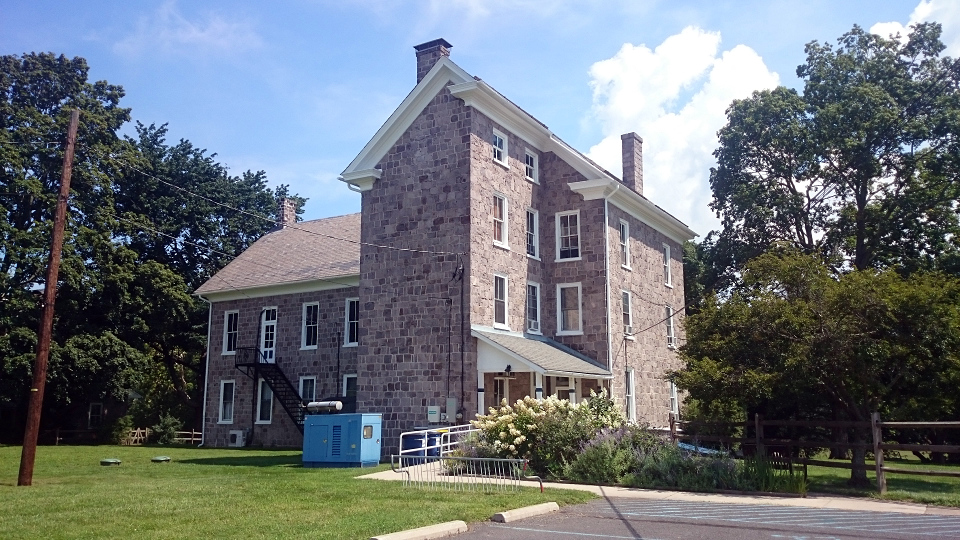 And by sheer luck Thursday was of the three days of the week that the library was actually open. With some help from the library staff, who were setting up an event in the community room on the first floor, I maneuvered a cart out to the car and unloaded the first round of boxes.

I stopped a while to wander through the nearby cemetery and look at the familiar landscape, and also snap some pictures. There was a driver here delivering other books to the library; I absentmindedly watched him take a photo of some butterflies hovering near the flowers. It was just a damn nice day.

After I had my fill of sunshine and cemeteries, I stopped at the Someday Cafe. 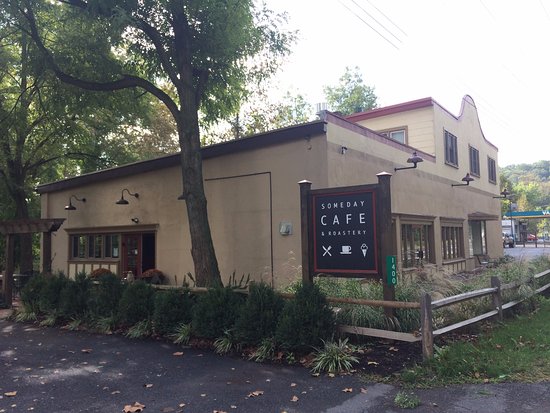 The building that now houses the Someday Cafe and Roastery had been sketchy and abandoned for my entire life. It started life as a car dealership back in the 40s or 50s, then became a dance studio, but all of my memories of it were as a sky-blue vacant building that was perennially for sale. At some point, someone tried (and failed) to turn it into an antiques shop (despite there already being another antiques shop right across the street), so I remember lots of junk sitting in the windows.

It’s really gratifying and cool to see the empty, abandoned space I remember from childhood turned into something like this. And I would have killed to have this kind of not-at-home space during high school. It’s just three miles from my house; it’s not completely inconceivable that I could have walked there if I really wanted to, except that the roads between here and my house have no shoulder and are not at all made for pedestrians. But still.

Not everything is better, of course. The abandoned paper mill across the street, which I’d always wanted to sneak into, is long gone. 🙁 So is my favorite used bookstore, which is now a bridal showcase, of all things.

After packing up a few more books, I meandered into Musikfest. This time I planned to spend the night (as opposed to accidentally doing so the last time I was here). I had my Musikfest mug in hand, complete with drink, and wandered around Main Street and the venues down by Monacacy Creek while I waited to meet up with Kelly and for SsingSsing to start. SsingSsing was the group I was easily the most excited to see at the festival. Glam rock + Korean folk music = WHAT THE HELL BUT ALSO YES.

Kelly and I enjoyed the show a lot, but unfortunately there was no merch table at all, so we couldn’t pick up an album or t-shirt or patch to sport our love. After show, we walked around for a little we disappear back to her place to use her bathroom and refill our mugs.

Back at the festival, Kelly grabbed some kind of cheese steak in a cup thing from a vendor and we sit and talk about Life, the Universe, and Everything. I love the work I do now, and I love the students I have now, but there is always a level of professionalism to maintain that isn’t the same as being coworker-buddies with someone. The conversations I have with my students are rewarding and interesting in their own ways—I learn so much about other cultures and traditions and food—but it’s hard to be someone’s teacher and be someone’s friend. Of course, I also have the privilege of dictating my own schedule and doing the vast bulk of my work in my pajamas, so you know, swings and roundabouts! Talking to her and then Best Chemist Friend is the perfect way to round out a day full of errands and music.